Snail Games introduced gaming smartphone at CES earlier this year, and now it’s available for pre-order from Amazon for $400. While the retail listing says the Snail Mobile W3D will ship in December, Snail says it should actually be available September 29th.

Of course you can play games on most smartphones. But there are a few things that make the W3D different. 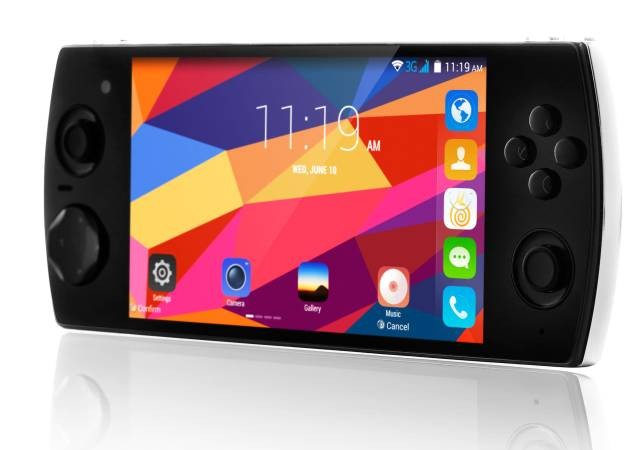 First, it has built-in gaming buttons and direction pads next to the display, allowing you to interact with games without covering the screen with your fingers.

Second, the phone offers a glasses-free 3D experience thanks to eye-tracking cameras and software that adjust on-screen content depending on the position of your eyeballs. Amazon’s Fire Phone has a similar glasses-free 3D feature, but it hasn’t been widely adopted by app developers (and the phone hasn’t exactly been a hit with customers).

Still, the 3D feature does work: I got a chance to test the phone at CES in January and the sample game and videos I saw certainly had 3D effects.

One unusual feature is that the phone has dual micro USB ports, allowing you to charge the phone with one cable while copying files with another.

It has a 13MP camera on the back and a 5MP front-facing camera. The phone supports WiFi and Bluetooth as well as GSM and 4G LTE networks. It’s a dual SIM phone which you can use on up to two networks at once, and in the US it should support AT&T or T-Mobile.

The phone is clearly intended for folks who spend more time playing games on their phones than holding them up to their heads to take a call: it’s kind of awkwardly shaped with large side bezels to accommodate the gaming buttons. But the W3D has a touchscreen display and can handle pretty much any Android app, including touch-only apps or games that don’t work well with hardware buttons.

One caveat? The Snail Mobile W3D runs Android 4.4 KitKat, which means it might not support some newer games or features that require Android 5.0 or later.

While Snail may not be a household name in the US, the Chinese company produces a number of online and mobile games, including some which are distributed in North America through the Snail Games USA division, including the Android game Taichi Panda.