Apparently people really want to play Android games on their TV. Last summer the folks behind the Ouya $99 Android video game console took to Kickstarter to raise nearly a million dollars for their project — and managed to pick up $2 million in pledges in the first day alone.

Now the makers of the GameStick $79 Android TV stick are following suit in a slightly more modest fashion. Yesterday they launched a campaign to raise $100,000 in 30 days… and managed to do it in less than 2 days. 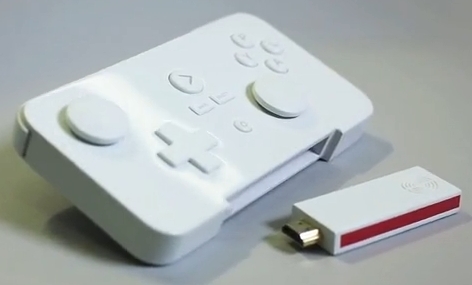 The GameStick is a device about the size of a USB flash drive which you can plug into a TV to run Android apps on a big screen.

We’ve seen those before. What makes the GameStick different is that it comes with a wireless controller designed for playing games, as well as a custom user interface and game store for video games designed to play well with a TV.

The stick has an Amlogic 8726-MX dual-core processor, 1GB of RAM, and 8GB of storage. It runs Google Android Jelly Bean software and connects to a TV via an HDMI plug. That’s all you need to get started with MHL-compliant televisions, but there’s also a microUSB port which you can use to plug in a power source if your TV doesn’t use MHL.

The developers of the project are the folks at PlayJam, a platform for bringing video games to Smart TV sets.

PlayJam plans to ship the first units in April. You can reserve one by pledging $79 or more at Kickstarter. Eventually you may be able to pick up a GameStick at retail stores as well.

While it’s not entirely clear whether Android-based game consoles like the Ouya and GameStick have what it takes to take on the Wii, PlayStation, and Xbox consoles that dominate the living room, I do like the idea of using inexpensive sticks to turn standard televisions into smart TVs. If your Smart TV or video game system starts to feel a bit dated in a year or two, it’s a lot cheaper to update to a new $79 stick than to go out and buy a new TV with a faster processor.