GameFly is taking this whole Netflix-for-Games thing pretty seriously. Like Netflix, GameFly began its life as a company that ships video game discs in the mail to subscribers who pay a monthly fee. Now GameFly is launching a streaming service that lets you do the same thing… without a disc. You know, just like Netflix did a few years ago.

The new GameFly streaming service is a bit different from Netflix though. Not only is the focus on games instead of videos, but the selection is much more limited and you only get access to the games you pay for. 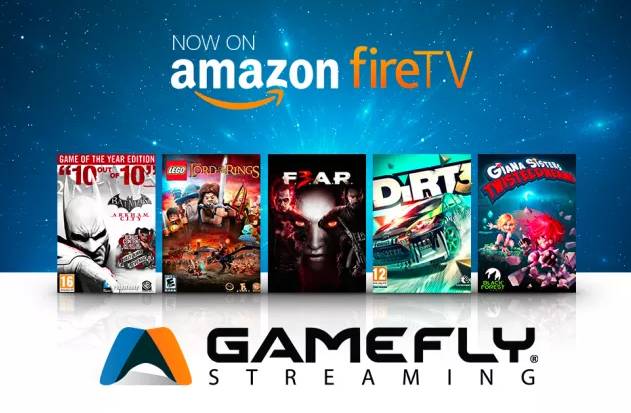 Here’s how it works: pay $6.99 per month for the Action Pack, and you can stream 7 action games as much as you like. Those games are F.E.A.R 3, Operation Flashpoint: Dragon Rising, Red Faction: Armageddon, Red Faction: Guerilla, Mafia II, Sleeping Dogs, and Hitman.

Want to play adventure games? For the same price you can get a pack of 7 different games. $10 gets you access to a Gamer Pack with 16 titles. There are also LEGO, Speed, and Fun Packs, and Gamefly says more games are coming soon.

So how do you play the games? Right now you play them on your TV… assuming you’ve got an Amazon Fire TV. That’s the only device that currently supports GameFly streaming. The company says it’s working on support for Amazon’s cheaper $39 Fire TV Stick, but it’s not ready yet.

You’ll also need a game controller (the official Amazon Fire TV controller works, as do Xbox 360, Logitech F-310, and Logitech F-710) controllers. And GameFly recommends you have a speedy internet connection with at least 10 Mbps of bandwidth and 5 GHz 802.11n or 802.11ac WiFi.

That’s because you’re not downloading the games and playing them on the Fire TV. You’re streaming them over the internet in real-time. So you’ll want a fast, reliable internet connection to make sure the games don’t stutter, the graphics don’t look glitchy, and the game system detects commands from your game controller quickly.

The upshot is that you can pay $140 for a Fire TV and controller and play games that would otherwise require a more powerful game console. The down side is that there’s a chance that internet connectivity could make some games perform less than perfectly, and you don’t actually own the games you play. But it’s theoretically possible to save money on a subscription-based service like this if you’re the sort of person who might otherwise spend hundreds of dollars per year on new games.

via Amazon and VentureBeat