Over the years we’ve seen a handful of tablets that are theoretically large enough to play boardgames on. But the Gameboard-1 may is a tablet that’s not just a big Android device. It’s a smart screen designed to bring board games into the digital age.

It’s a 16″ x 16″ tablet that supports multitouch input — but which can also sense and interact with game pieces that are placed atop the board. Stick programmable bases to the bottom of your chess pieces or RPG figurines and the board can tell the difference between pawns and rooks, or see the  XP level of your wizard.

Developed by The Last Gameboard, a team that includes original Xbox system architect Rob Wyatt, the Gameboard-1 is still just a prototype at this point. But the folks behind the project have launched a Kickstarter campaign in hopes of delivering the first real hardware in late 2020. 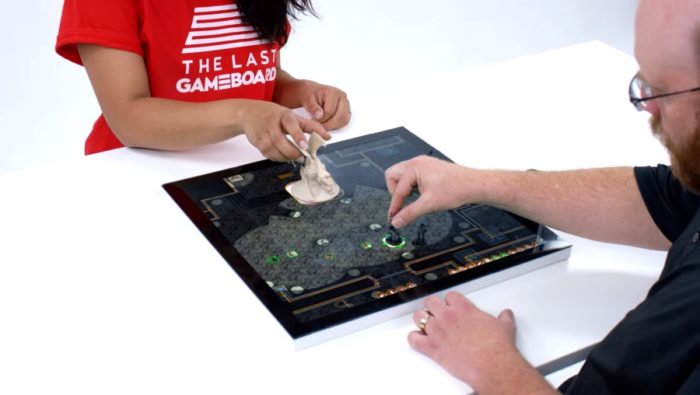 The Gameboard-1 is designed to let you play multitplayer board games with an all-digital board.

But it’s also a lot more versatile than a physical board. You can play multiple games in multiple ways on the digital board.

It supports WiFi and Bluetooth, allowing you to use your phone as a remote control. For example you can roll a set of dice on your phone and send them to the board to reveal the results. Or you glance at your phone to see your hand in a cardgame, before revealing your cards to other players by sending them to the shared board.

Multiple boards can also be connected together to create a larger surface. 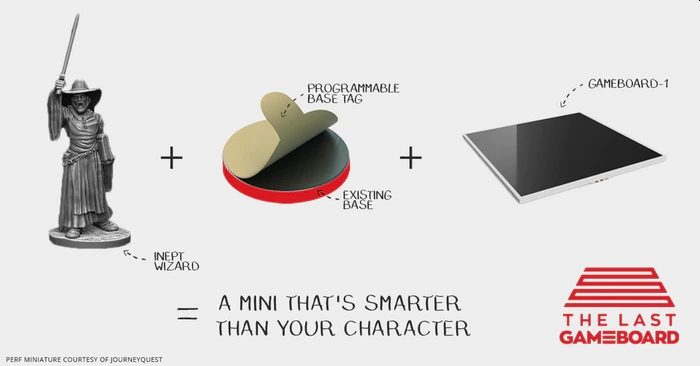 And the programmable base tags can store up to 2K of encrypted data, allowing you to put spells, character information, or other data on your pieces. The Gameboard-1 will come with 20 of these programmable bases.

While the tags are passive (meaning they don’t need any batteries to store data that’s readable by the Gameboard-1), the system also supports “Active Pieces” with batteries that enable 2-way communication. For example, you could have buttons that you can press to enable in-game actions, or you could have character pieces that light up when you cast a spell.

Of course, all this sounds good in theory, but a digital game board is only useful if there are games for the platform. So The Last Gameboard is planning to launch a marketplace with “thousands of individual titles” that users can purchase and an optional subscription-service who want a Netflix-for-games option with access to a bunch of titles.

Some partners will include D20Pro, Serenity Forge, and Cryptozoic Entertainment and there’s an SDK for developers that want to create games for the platform.

In terms of hardware, the Gameboard-1 has a 1920 x 1920 pixel display, an unspecified 64-bit processor, 4GB of RAM, 64GB of eMMC storage, and a custom operating system.

The Last Gameboard notes that the board supports online play, local network play, or offline gaming. And you can also use a USB-C to HDMI adapter if you want to connect the board to an external display.

This isn’t the first digital game board we’ve seen. A company called PlayTable was supposed to launch last year… but didn’t. It’s still theoretically on the way, but I haven’t any recent estimates for a release date.