Samsung is holding a press event later this month, where the company is expected to officially introduce the Galaxy S8 smartphone. But thanks to a series of leaks in recent weeks, we have a pretty good idea of what to expect.

And device makers in China have managed to make a Galaxy S8 clone before the real thing has even been announced. 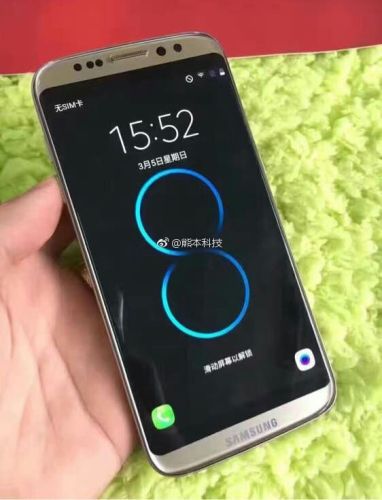 Like the leaked pictures of Samsung’s upcoming phone, the knockoff appears to have a large display with rounded edges, slim bezels, no home button on the front of the phone, and a fingerprint sensor on the back, next to the camera.

The placement of some of those items is different than on the leaked photos, and the phone has a micro USB port rather than a USB Type-C connector. That helps make it clear that these images are showing a fake. Another sign?

Samsung’s Galaxy S smartphone launches are usually pretty widely anticipated, since the company is the dominant name in the Android smartphone market. But this year’s phone may be an even bigger deal than usual for a few reasons.

First, the phone’s design represents a pretty major departure from earlier Samsung devices, thanks to the reduced top and bottom bezels and the removable of a home button.

Second, the Galaxy S8 is the first flagship phone from Samsung since last year’s disastrous launch of the fire-prone Galaxy Note 7. It’s possible that one reason Samsung decided to go with a larger screen (and higher screen-to-body ratio) with this year’s Galaxy S phones is to appease fans of big-screen phones who may have been disappointed that last year’s Galaxy Note was subject to a recall.

via GizmoChina and Phone Arena