Priced at about $550 the Note is at least $50 more than it’s closest tablet competition. The higher price isn’t just because of the HD+ resolution display, the octa-core processor, or the ultra thinness every tablet is trying to achieve these days. It’s also due to the S Pen and the Wacom technology behind it that allows for a pen and paper-like writing experience. 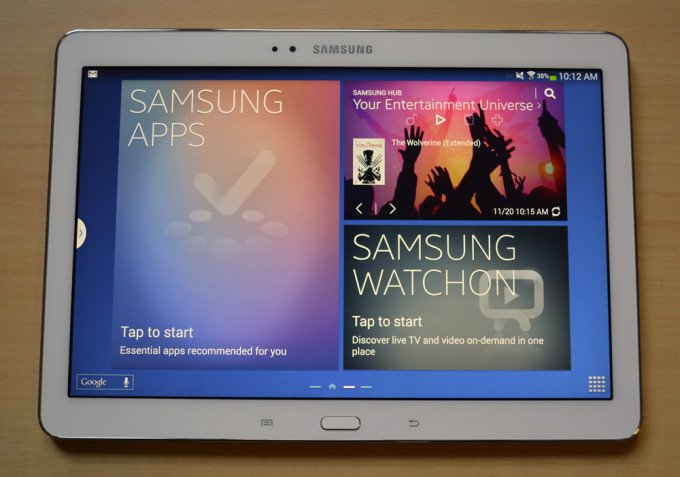 Samsung loaned me the Galaxy Note to test and over the last few weeks I’ve used it as a substitute for my regular paper notebook and as a work/writing machine.

Android still can’t replace Windows for real work due to limitations in the operating system — and the apps available. The Note clears a few of those obstacles away. It offers better multitasking with MultiWindow, for instance, and adds some new tricks via the S Pen.

The Note 10.1 was announced at the same time as the Note 3 smartphone, and thus the tablet shares the same design language instead of looking more like Samsung’s other Galaxy slates. The leather-like plastic back with “stitching” and flat, chrome band around the edge strikes some as overkill at best and cheap at worst. I’m neutral on the aesthetic charms and more concerned about how it feels in the hand.

The Note comes off solid and sturdy even though it’s plastic and I can’t argue with the biggest benefit of using this material: light weight. For a 10-inch tablet the Note is quite light at 19 ounces. That’s three more than the iPad Air, but the difference isn’t that noticeable.

One of the best design decisions Samsung made with the new Note was to bring back the physical Home, Back, and Menu buttons. Yes, I know that you don’t need these with Android, anymore, and it’s ruining the purity of the platform. I might agree with that when it comes to normal tablets, not so much with pen-enabled ones. 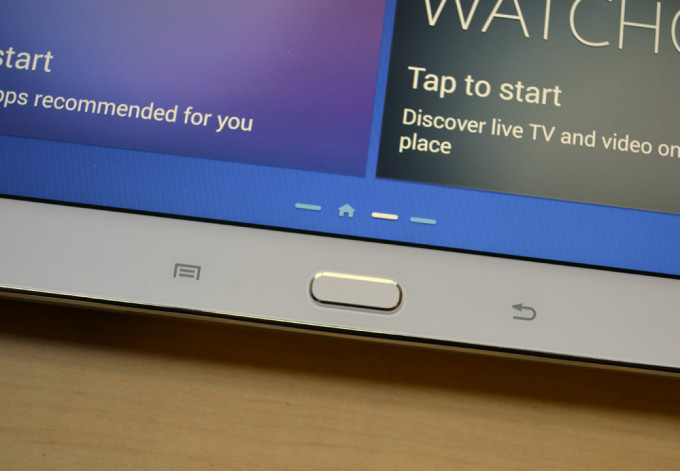 The most frustrating thing about using the original Note 10.1 (and the Toshiba Excite Write) is that it’s hard to avoid hitting that bottom bar where Home, Back, and Recent Apps reside with the heel of the hand even with good palm rejection in the apps. Lift the pen too far from the display and suddenly I’m looking at a list of apps or the Home screen. I had to put a piece of cloth over it to stop the problem.

With the physical buttons sitting on one side of the Note, I can avoid them by simply using it in a different orientation. This made my time with the tablet so much more enjoyable and I would upgrade just for that alone.

Another reason to trade up from the first gen is the display. The 2560 x 1600 resolution makes a big difference when reading and surfing the web. Colors are accurate thanks to the LCD panel, making the Note a good photographer’s companion. Wide viewing angles and adaptive colors mean watching video on it is a great experience, too.

Samsung didn’t fiddle with the S Pen itself much, focusing more on what you can do with the stylus on the software end. The pen itself is now a uniform shape so you can put it into the port either way, which is a nice touch.

It’s still light and skinny and doesn’t quite feel like a real pen, though it is easier to use long term than the one that comes with the Note 3. Another nice addition: the pen works on the capacitive Menu and Back buttons. 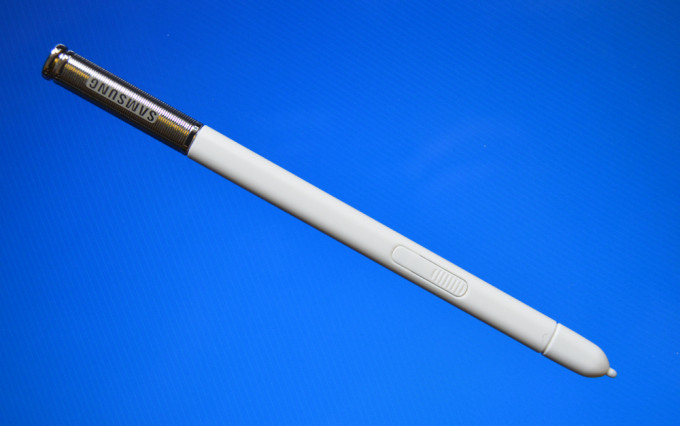 Being a pen and paper person, I am always impressed by how natural the S Pen feels when writing. It’s not exactly the same sensation, but it’s also not like scratching on glass with plastic.

The S Pen glides across the screen and strokes register with almost no discernable lag. The writing experience is as natural as you’re going to get in this form factor, and it includes pressure sensitivity.

On the software side Samsung added more pre-loaded apps made to work with the S Pen and gave it a bit more to do in the interface. Now whenever you slide the pen from its port or click the side button while hovering you get a circular menu dubbed Air Command that gives quick access to five key apps: Action Memo, Scrapbook, Screen Write, S Finder, and Pen Window. 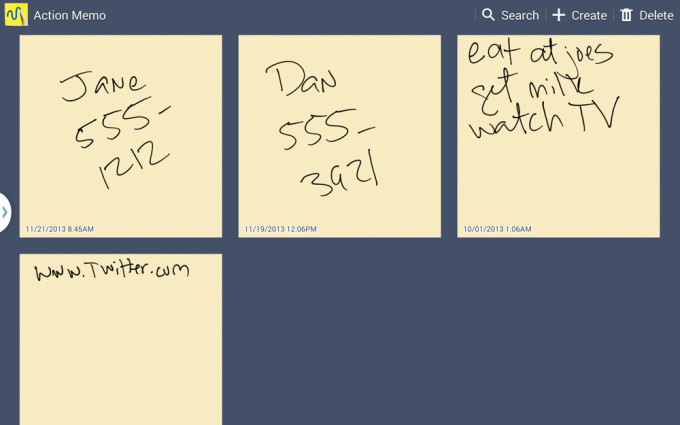 Action Memo is not to be confused with S Note, the longstanding note-taking app from Samsung. Having both on board felt over the top at first. Over time I came to appreciate their separateness.

S Note is useful for keeping long-form notes, say for a class or a research project, but once you mix those in with little Post-It type jottings the whole thing gets unmanageable fast if you don’t stay on top of it. Action Memo is made for that type of quick note, and by keeping them separate it makes all notes easier to find. It’s also much easier to turn a quick note into a new contact, launch a website, and other useful things.

Scrapbook does strike me as overkill, as the ability to snip and save sections of web pages and images can be useful, but it was just as possible with S Note.

S Note’s basic functionality remains the same despite the a visual makeover for the 2014 Edition. One nice addition is the ability to search for handwritten words within notes. The overall handwriting recognition is very accurate and S Note was able to recognize my less than perfect scribbles most of the time. 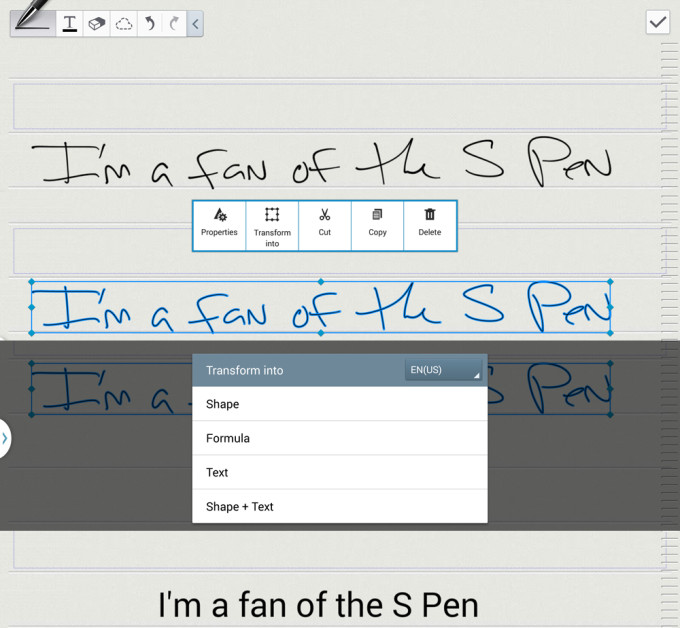 This is true in the handwriting keyboard as well. Once I got it working, the recognition engine converted my writing fast and almost 100 percent accurately.

This keyboard also handles continuous writing much better. Now you can just keep writing in the middle of the area and the words recognized automatically move off to the left. If you need to edit, just drag the screen until you find the word in question.

The only pen-related app I didn’t find that useful is Pen Window. It’s a cute idea–draw a window the size you need and pop an app into it, like the calendar or Hangouts, float it on top of other active apps, minimize it to a little floating icon when you want it out of the way.

The problem I found is that there are too many steps to make it happen. You have to bring up Air Command, choose Pen Window, draw the window, then choose the app. The floating icons, similar to Chat Heads on Facebook Messenger, don’t ever quite get as out of the way as I’d like. I’d rather just use MultiWindow. 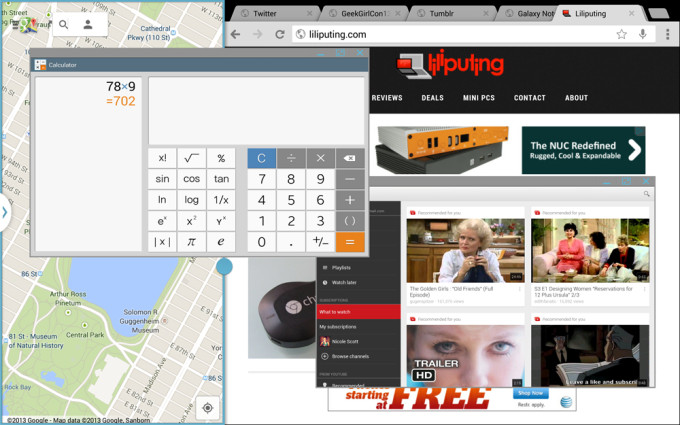 With TouchWiz, Samsung’s proprietary skin over Android, it always feels like there is a lot going on at once and the apps mentioned above only add to that. In this case, it’s all in service of a making the Note 10.1 a better productivity tool than most other tablets.

The extra functionality of features like MultiWindow do make it possible to use the Note more like you’d use Windows. Two apps side-by-side on a screen this size is very useful, especially now that you can resize them. The number of apps compatible with this split screen is growing and includes Google staples Chrome, Maps, and Hangouts.

That sounds impressive, but at launch the Note 10.1 2014 Edition didn’t feel impressive. Performance was never super sluggish, things just didn’t run as smoothly as they should have. Apps took a bit long to load and too often I’d run into occasional stutter or lag, especially with more than one app active on the screen.

This issue plagued the first generation Note 10.1 as well. Samsung eventually released software updates to solve the problem and that worked. Since the 2014 Edition came out the company has pushed three updates and the performance is much steadier now. While not completely smooth, it’s speedy enough that I wouldn’t warn anyone off the tablet completely.

With heavy use and the brightness set to Auto, I was able to use the Note 10.1 for a day and a half before needing to charge it.

Continuous use was around 8.5 to 9 hours; not quite what Samsung claims but pretty close.

When sleeping, the tablet managed power well, so with light use you can probably get two days out of it before needing to charge. 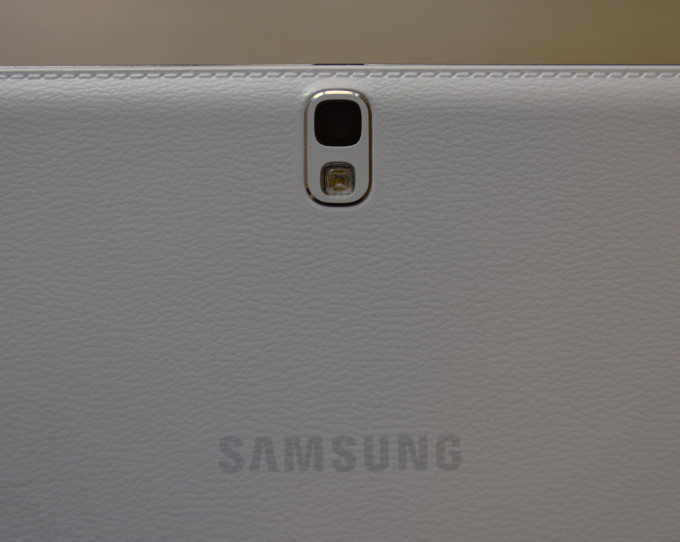 By now most of us are used to tablet cameras not being as impressive as those found on smartphones. That’s all right since you’re not meant to take everyday pictures with a tablet.

On one such as the Galaxy Note the camera should be good for at least one thing: capturing text. I was surprised that Samsung didn’t include an app or a special mode in the camera app for capturing text or whiteboards/projector screens.

Toshiba did for the Excite Write since that tablet, like the Note, is aimed at students and business people. Good thing there are camera scanner apps available that will do this and the 8 megapixel shooter itself is decent for the purpose.

The Note won’t take the crispest “scans” of text, but the quality and resolution are good enough for reading on screen if not printing. Whiteboard shots may prove more difficult if the lighting is bad since the camera doesn’t do that well in low light and using the flash is a no go in that situation.

The multiple shooting mode interface familiar to anyone who owns a Galaxy S4 or a Galaxy Camera is here as well. The non-text pictures are good enough for scrapbooking or adding to a note, but they won’t be precious memories forever.

The Samsung Galaxy Note 10.1 2014 Edition is an excellent upgrade to the first generation even if it shares some of the same problems at release as it’s predecessor. This is a premium tablet at a premium price that’s worth it if you’re looking for a great pen-enabled tablet. If you don’t intend to use the S Pen, the Note isn’t significantly more exciting than the Sony Xperia Tablet Z (currently $420 on Amazon). If you do, this is the best stylus-bearing Android tablet on the market aside from it’s little brother, the Galaxy Note 8.0.

I’m confident that Samsung will address all of the performance issues in time just as they did before. The company is good at tweaking until they get it right even if they don’t always deliver big Android updates in a timely manner. Other than that, I have no major complaints about this tablet. It’s light, comfortable to hold, sports a terrific display, and makes a good replacement for pen and paper for taking notes, drawing, etc.

The $550 model comes with 16GB of internal memory. If you’re a gamer, I’d suggest paying an extra $50 for the 32GB model. If media is more your thing you can probably just get away with sticking a card up to 64GB in the microSD slot and storing your videos, music, and photos there.