Samsung is expected to unveil next-gen smartphones, smartwatches, and maybe even tablets at an event on February 24th. But @evleaks didn’t want to wait until then to share a leaked photo of Samsung’s next two smartwatches. 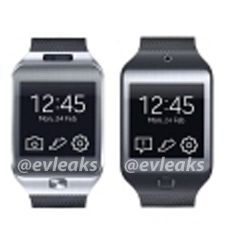 There have also been reports that the next-gen smartwatches will run software based on Tizen rather than Android.

It’s likely that the Galaxy Gear 2 Neo will be the cheaper of the two. Samsung recently launched a Galaxy Note 3 Neo which is a moderately less expensive version of its big-screen phone.

Other details will likely be revealed on Monday. It’s also possible we could see the introduction of a Galaxy Gear Fit wearable fitness device.