NSA whistleblower and privacy activist Edward Snowden has partnered with hardware hacker bunnie Huang to develop a tool that lets you know if your smartphone may be spying on you (or rather, assisting someone else to spy on you).

The two have published a paper about a system which they describe as a tool for “countering lawful abuses of digital surveillance.” In other words, it’s a design for smartphone case that monitors your phone’s wireless activity and could let you know if government agencies are spying on you. 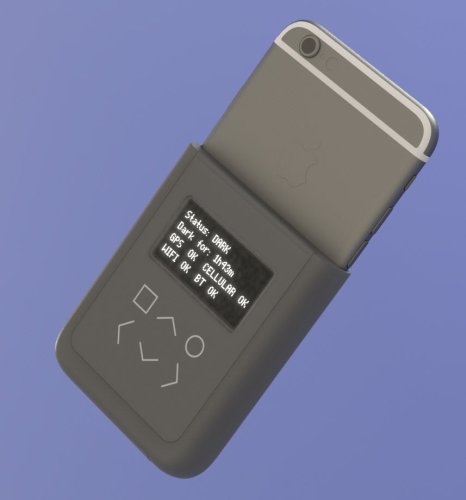 The stated goal of the project is to provide a tool to journalists that would prevent them from government snooping. This could assist reporters working on stories with government whistleblowers like Snowden, or those working in areas where governments have tracked reporters by their phones… and sometimes even used that information to kill journalists.

You’d think that simply switching your phone to airplane mode would cut off wireless signals, but that doesn’t necessarily disable GPS… and a phone that’s been hacked might display a message letting you know that cellular data is disabled when it’s actually not.

So Snowden and Huang developed a design for a case that you can attach to a phone to monitor GPS, WiFi, Bluetooth, and cellular signals and let you know if signals are being transmitted without your knowledge even when those features should be turned off.

While the gadget looks a bit like a battery case, it has an independent processor, battery, FPGA, and display. And installation isn’t quite as simple as sliding a phone into a case: you’ll also need to open up the phone and make some modifications with a soldering iron and screwdriver (the paper recommends simply disconnecting the NFC antenna since it’s unlikely that reporters in conflict zones will be using Apple Pay).

Right now the design is focused on a single smartphone model: the 4.7 inch iPhone 6. But in the paper, Snowden and Huang say the same basic principles should apply to any other phone, it’s just that one device needed to be selected for demonstration and deployment purposes, so they chose one of the most popular phones currently used by journalists.

You can’t actually buy a case yet. The goal is to produce a prototype and verify that everything works “over the coming year,” and if that’s successful the Freedom of the Press Foundation may raise money to produce and distribute modified iPhones to journalists working in high-risk areas.

The design will be freely available to anyone looking to inspect or modify the technology for their own needs.