There was a time when QWERTY keyboards were a must-have feature for smartphones. These days your real option is to buy a BlackBerry device.

But that’s set to change this summer. A startup called F(x)tec is introducing a new Android phone called the F(x)tec Pro 1.

The company is showing the phone to reporters at Mobile World Congress this week, and it’s set to launch in July, but you can pre-order one now for $649. 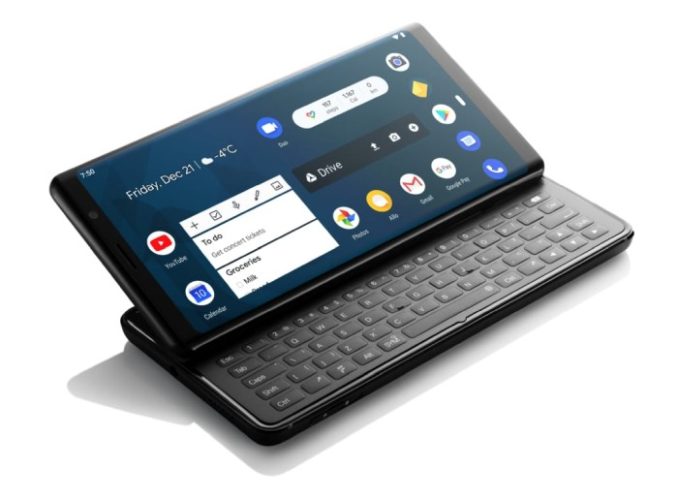 If this idea sounds familiar, that’s because F(x)tec evolved out of a project to build a slide-out keyboard Moto Mod for Motorola’s Moto Z smartphones. Last year the developers at Livermorium announced plans to scrap that product and just design their own phone. And last month they rebranded as F(x) Technology… before becoming F(x)tec.

The most distinctive characteristic of the F(x)tech Pro 1 is clearly the keyboard. It features 64 backlit keys that are arranged in f5 rows. The keyboard slides out and tilts the screen to a 155 degree angle when you’re using it, and hides behind the display when you don’t need it.

The result is a phone that you can use as a touchscreen device or as a thumb-typing device that gives you tactile feedback as you type and prevents the keyboard from covering a substantial portion of the screen.

F(x)tec as also built a custom Android launcher app that’s optimized for use in landscape orientation. And thanks to the arrow keys you can use the keyboard to navigate the user interface without touching the screen at all. You can launch apps, scroll through your news feeds or web pages, and perform other actions.

While the keyboard sets this phone apart, the rest of its specs and features seem to be a bit of a mixed bag. On the one hand, there’s a 6 inch, 2160 x 1080 pixel AMOLED display, 6GB of RAM, and 128GB of storage plus a microSD card reader that can theoretically support cards up to 2TB (if there were any cards that large).

On the other hand, it has a Qualcomm Snapdragon 835 processor. That’s not a bad chip by any stretch of the imagination — it’s the processor powering my Pixel 2 smartphone. But shipping a $649 phone in 2019 with a processor released in 2017 does seem a bit odd.

The company says it was cheaper than newer flagship chips though… and the Snapdragon 835 is still a bit more powerful than the Snapdragon 660 chip found in the BlackBerry Key2 smartphone that launched last year for the same $649 price.

There’s a fingerprint sensor on the side of the phone, an RGB LED notification light, and the phone will ship with Android 9 Pie.

Here’s a hands-on video from the folks at PocketNow: