Google TV is basically a custom version of Android designed to bring online media and third-party apps to a television, while also allowing you to access live and recorded TV from your service provider. But it hasn’t exactly been a runaway success. Google’s been offering the platform for a few years, but the existing Google TV devices often feel complicated and sluggish.

TV and set-top-box makers aren’t necessarily giving up on the idea of using Google software to make TVs “smarter,” but they’re taking different approaches to the space.

Hisense, for instance, is showing off two different types of Android-powered smart TV tech at the Consumer Electronics Show. The first approach involves outfitting televisions with the guts of an Android tablet and loading them up with Android software, access to the Google Play Store, and a custom user interface that makes it easy to navigate Android apps on a big screen.

Hisense calls its Android-based TV platform VIDAA, and it brings support for Android apps including Netflix, Pandora, and YouTube, as well as at least one app that had previously only been available for Google TV: Amazon Instant Video.

The company is showing off a  line of televisions with 50 to 85 inch high-resolution screens featuring the Vidaa interface and an RF remote control with NFC and support for voice and gesture controls.

Not ready to buy a new TV? In December Hisense also announced a new set-top-box that you can plug into an existing TV. It’s called the Hisense Pulse Pro and it also features Android-based software. At the time the company didn’t provide many details about the device, but CNET spotted the Pulse Pro at CES this week and spent a little time checking out the new user interface. 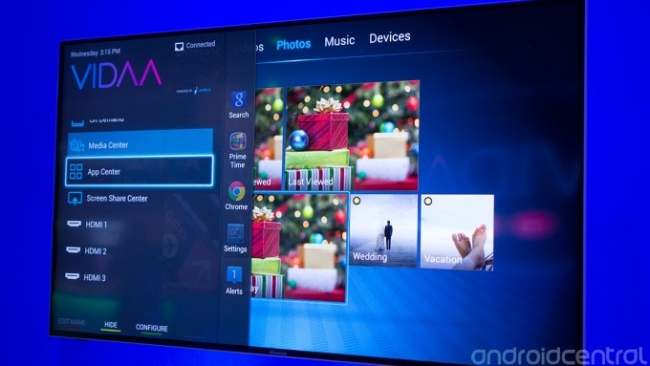 Word on the street is that Google plans to drop the “Google TV” brand and start referring to its TV software as Android (which makes sense, because that’s basically what it is). Either the Pulse Pro is running Google’s next-gen Android-for-TV software, or it has a custom version of Google TV or Android.

Either way, it’s designed to be much simpler to navigate than earlier Google TV devices. There’s a simpler remote control which uses voice recognition instead of a keyboard for text entry. 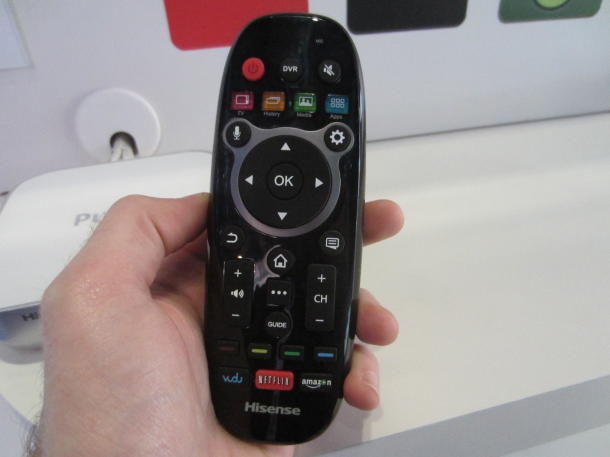 This leaves you with a 30-button remote that looks a lot more like something you’d get with a TV or DVD player, and that includes direction buttons and dedicated keys for Vudu, Netflix, and Amazon. It also supports motion controls for waving around an on-screen pointer.

You can find more details about the Hisense TVs with VIDAA at Android Central, and CNET has more photos and details about the Pulse Pro. Neither site explains why Hisense has two different (but similar) user interfaces for its Android software for TVs.