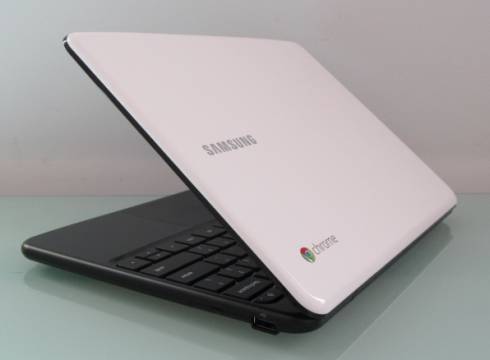 Google’s Chromebook platform pairs a relatively thin, light, and inexpensive laptop with Chrome OS — an operating system designed to run a web browser and virtually nothing else. The result is a notebook computer that boots in just a few seconds, lets you get online almost as fast, and allows you to surf the web or run thousands of web-based applications while your data is stored online, allowing you to access your documents, pictures, or other files from any computer.

But when I reviewed the Samsung Series 5 Chromebook recently, I noticed a weak link: the Intel Atom N570 processor really isn’t good enough to provide a seamless web experience. Yes, the laptop booted incredibly quickly. But once the operating system was up and running I wasn’t all that impressed with overall performance.

Sure, the Series 5 was good enough for reading news web sites, composing documents in Google Docs or other online office applications, or even editing pictures using Picnik. But the computer struggled with online video from some sites and the overall system performance slowed down when I had multiple browser tabs open. The computer also notched a pretty low score in the SunSpider JavaScript benchmark.

Now it looks like Google and Intel may be sealing a deal that would lead to higher-performance processors in next-generation Chromebooks. DigiTimes reports that Intel has agreed to offer discounts of 10 to 20 percent to computer makers looking to ship Chromebooks with Intel Core i-series processors instead of lower power Atom chips.

Even with discounted chips, this could push the base price of a Chromebook up so that you may have to pay more than $500 to get your hands on one. Right now Acer’s Chromebooks start at $349, while Samsung offers models for $429 and up. When compared with Intel Atom-powered netbooks running Windows 7, those prices seem a bit high.

Maybe a faster processor will help justify the higher cost… but while there are certainly some benefits to the Chromebook platform, it still feels like you’re paying more and getting less when there’s very little that you can do with a Chromebook that you couldn’t also do just by installing the Google Chrome web browser on a Windows, Mac, or Linux notebook.

One reply on “Future Chromebooks could feature faster Intel processors”