The FunBox is a Chinese video game console with an NVIDIA Tegra 4 processor, 2GB of RAM, and an Android-based operating system. Developed by ZTE and The9, the FunBox launched in China recently, and now it’s available internationally for $159… if you don’t mind ordering from a reseller at retail marketplace AliExpress. 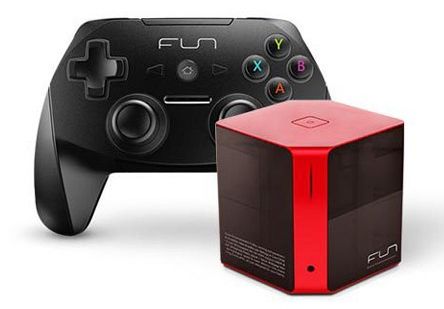 The box is powered by NVIDIA’s quad-core, ARM Cortex-A15 processor and features 8GB of storage plus 2 USB ports, HDMI and Ethernet jacks, and a microSD card slot.

Along with the box itself, you get a media-centric remote control with Android home, back, and menu keys and a wireless game controller with the usual analog and digital sticks and buttons as well as a few dedicated Android buttons for home and back functions.

The FunBox packs a lot more horsepower than the $99 Ouya game console, which could help explain its higher price tag. But that might not be the best point of comparison anymore. Amazon charges $99 for its Fire TV set-top-box which has a Qualcomm Snapdragon 600 processor and 2GB of RAM… but Amazon does charge an extra $40 for its video game controller.

Still, if you’re looking for a well-supported Android box for playing games and streaming video, the Fire TV might be the device to beat at the moment. If you’re looking for something a little… different, I suppose it’s nice to have the option of paying a few bucks more for the ZTE FunBox even though it’s not yet officially sold in US stores.