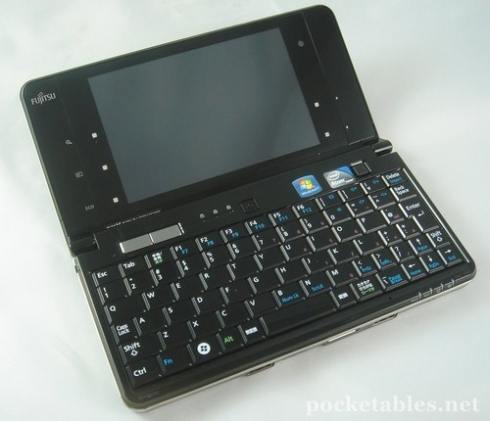 The Fujitsu UH900 is one of the tiniest mini-laptops you’ll ever see with a high definition 1280 x 800 pixel display. It crams all of those pixels onto a 5.6 inch display. The computer also features a full QWERTY keyboard that’s about 75% the size of a full sized keyboard. Touch typing isn’t going to be comfortable on this little guy, but the UH900 is small enough that you could probably hold it with two hands and type with your thumbs, smartphone-style.

I got a chance to spend a few minutes with the Fujitsu UH900 at CES last month, but Jenn at Pocketables is getting a much closer look. She’s posted a series of unboxing photos and some first impressions, with a review set to follow soon.

The computer comes with Windows 7 discs, a power adapter, stylus, and an adapter for both VGA and Ethernet connections.

Jenn’s posted a number of photos comparing the UH900 to other tiny computers. It’s smaller than a Sony Vaio P, but larger than the latest mini-laptops from UMID.

The UH900 is available with a 1.6GHz Intel Atom Z530 or 2GHz Atom Z550 processor from Conics, although you’ll pay a premium for importing the computer from Japan. You can also pick the UH900 up for $849 after rebate directly from Fujitsu, but you’re stuck with the Z530 processor.