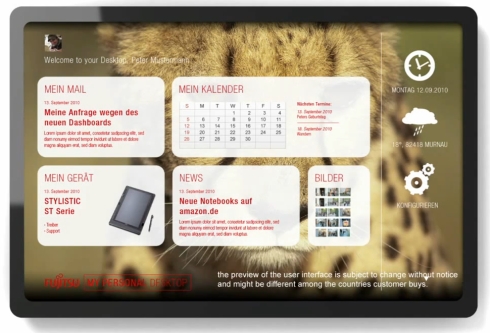 Fujitsu started to show off an upcoming Windows 7 tablet at CES earlier this month, and while the demo unit was barely functional, the company has started promoting the tablet a bit… in a manner of speaking. The company put together a demo video featuring Fujitsu product strategy director Meinolf Althaus, and from what I can gather, the company wants you to know that the tablet won’t be as rough to the touch as a scratchy kitchen sponge, it will be as intuitive to hold as a hammer, and you’ll be able to consume content as easily as chocolate.

OK, obviously the video’s a bit tongue in cheek. But toward the end you do get a look at the custom user interface which Fujitsu will run on top of Windows 7, providing home screen widgets, RSS feeds, program shortcuts and other customizable options.

Interestingly, Althaus doesn’t actually use the tablet very much in the video, suggesting that it might still need a little more time in the oven before it’s ready for a public release.