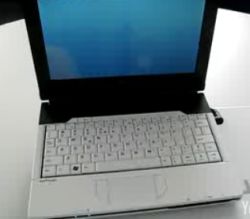 It looks like Fujitsu Siemens could be launching its Amilo Mini netbook in a few weeks. The company is holding a press event on August 28th at the IFA trade show in Berlin, and IDG News says it’s likely that Fujitsu Siemens will likely discuss the notebook at that point.

While a few pictures and videos of the Amilo Mini have been making the rounds, there’s not a ton of information about the machine available. It’ll pack an Intel Atom CPU, 1.3MP webcam, run Windows XP, and cost between 300 and 400 Euros. The only things that seem to set it apart from the dozens of other netbooks hitting the market are the fact that the Amilo Mini will have changeable faceplates in multiple colors including brown, black, pink, and red.