Sure, Windows Phone 7 is designed to run on handheld devices, but have you ever wished you could avoid talking to someone by claiming your phone had a BSOD crash? Well Fujitsu may be fixing to make your dreams come true. 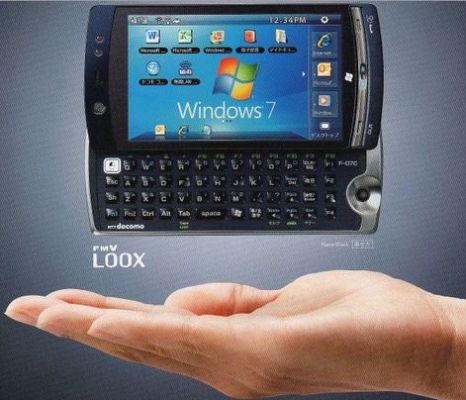 The folks at Pocketables found a scanned spec sheet on a Chinese web site for a new device called the Fujitsu LOOX F-7C. The little guy is a handheld device with a slide-out keyboard and a 4 inch 1024 x 600 pxiel display. It has a 1.2 GHz Intel Atom Z600 processor and runs both Windows 7 Home Premium, and Symbian.

It also reportedly has 1GB of RAM, a 32GB solid state disk, front and rear cameras, WiFi, Bluetooth, and 3G.

If you’re wondering what kind of battery life you’d get on a Windows 7 phone, the answer is less than 2 hours. That’s probably why the phone also lets you run Symbian. The good news is that you should get up to 350 hours of standby time in phone mode. I suppose you could just switch to Windows mode when you really need to… I don’t know, play World of Warcraft?