The Fujitsu LifeBook UH900 is a tiny laptop with an an Intel Atom processor. But there are two things that keep it from being a true netbook. First, with a starting price of about $849, it’s more than twice as expensive as a typical netbook. Second, with a 5.6 inch display and keyboard that’s barely touch-typable, the UH900 almost feels more like a smartphone than a laptop — you know, if smartphones could run Windows 7 Home Premium. 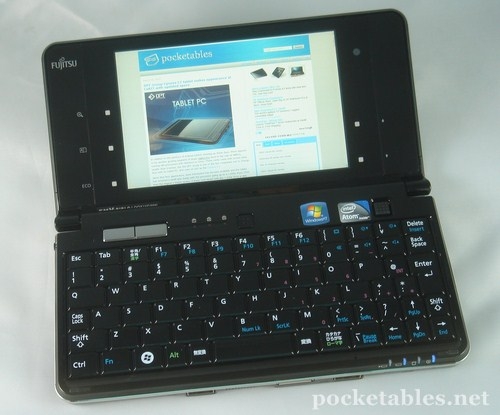 Pocketables has published a review of the Fujitsu LifeBook UH900. The verdict? Sure it’s expensive, but good luck finding another device this small and light with this many features.

The unit Jenn reviewed for Pocketables is a Japanese model that has a 2GHz Intel Atom Z550 processor, 2G of RAM, and a 30GB solid state disk. It includes Bluetooth, WiFi, and WiMax capabilities and has a 1280 x 800 pixel 5.6″ touchscreen display. Oh yeah, and it only weighs about 17 ounces.

She wasn’t that impressed with the build quality. And while the UH900 has a multitouch display, she found it was actually faster to use the mouse controls to zoom or rotate content than to use the touchscreen gestures.

Make sure to check out the full review for the results of Jenn’s battery test, typing test, and overall impressions of the UH900.