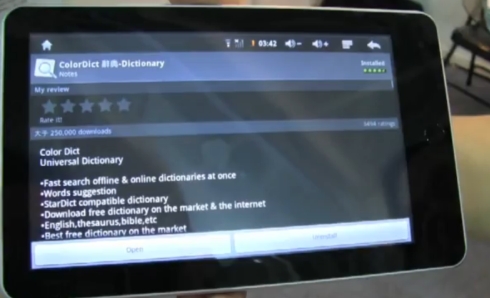 The Fujian Sanxi tablet has a 7 inch touchscreen display and a 600MHz Rockchip ARM-based processor. It seems a little sluggish at times in the video below, but to be fair, it’s also dirt cheap. Fujian expects to sell the tablet to distributors for around $105, which means it will probably cost less than $200 when it hits the streets.

Up until recently, the only way you could get access to the Android Market and the default Google apps for Android was to buy a smartphone. Most Android tablets ship without Gmail, Google Maps,  or the Android Market preinstalled. While some hackers have figured out how to add those features, there wasn’t an official route.

It’s entirely possible that Google hasn’t changed its stance yet, and that these Android tablets with Market access are simply the result of a few companies preloading those same hacks. But as an end user, I don’t know if I really care how it gets done. I just know I’m reluctant to spend money on an Android tablet that doesn’t have easy access to the tens of thousands of third party apps available in the Android Market.

You can check out Nicole’s hands-on video with the Fujian Sanxi tablet after the break. Aside from the sluggish processor, it actually looks quite nice.