The Federal Trade Commission is ordering US wireless carrier TracFone to pay $40 million as a penalty for promising “unlimited” data to customers, but then throttling connection speeds or canceling service altogether after customers use more than a certain amount of data.

The FTC isn’t saying that there’s anything wrong with throttling data or terminating service when a customer uses too much data. But what the agency is saying is that wireless carriers can’t call their service unlimited if they’re going to do that.

This could change the way other mobile operators advertise their plans. 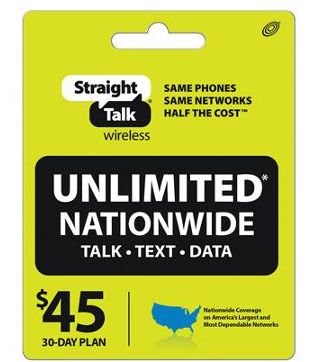 I’m hoping carriers will continue to offer the same sort of plans TracFone currently provides even if they’re advertised under different names. Odds are that truly unlimited data plans would cost substantially more than the current plans which offer around 1GB to 3GB of “high speed” data and unlimited bandwidth at lower speeds.

I’ve been a Straight Talk customer for a few years, and I pay about $50 per month for “ulimited” data, but I’m well aware that if I use more than 3GB within a billing period, my speeds will be slowed until the next month.

The problem is that customers hadn’t always been made aware that unlimited didn’t always mean, well… unlimited. The FTC’s ruling could lead TracFone and other carriers to use more clear language in the future.

Several years ago Straight Talk and other TracFone subsidiaries didn’t say anything about how much free high speed data you could use each month, and I only knew that the data wasn’t truly unlimited because of reports from other users. Starting in late 2013 the company did start to make some disclosures, but the FTC says they “were often not clear and conspicuous.”

These days you’re much more likely to find language that reads something like “30 day Unlimited Plans include 3 GB of high speed data per 30 day cycle” on the Straight Talk website.

Personally I’ve never had my speed throttled. But if you’re a customer with TracFone or one of its subsidiaries and you’ve had your speeds slowed down or your service terminated, you can file a claim for a refund at the FTC website.