Modern laptops, smartphones and tablets are multi-purpose gadgets that you can use to read, write, watch, play, or create all sort of things. But sometimes a single-purpose gadget is the right tool for the job. That’s why some folks prefer reading eBooks on a Kindle or NOOK to reading on a phone or tablet — you get a distraction-free experience, long battery life, and a screen that’s easy on the eyes.

A few years ago Astrohaus launched a product that brings similar benefits to writers: the Freewrite Smart Typewriter is a portable writing machine with an E Ink display, a mechanical keyboard, and a battery that lasts for weeks at a time.

Now the company is getting ready to launch a new model that’s more portable and more affordable: meet the Traveler.

Update: The Traveler is up for pre-order via an Indiegogo crowdfunding campaign. It’s expected to ship in January, and early backers can pre-order one for $269 or get a 2-pack for $558. 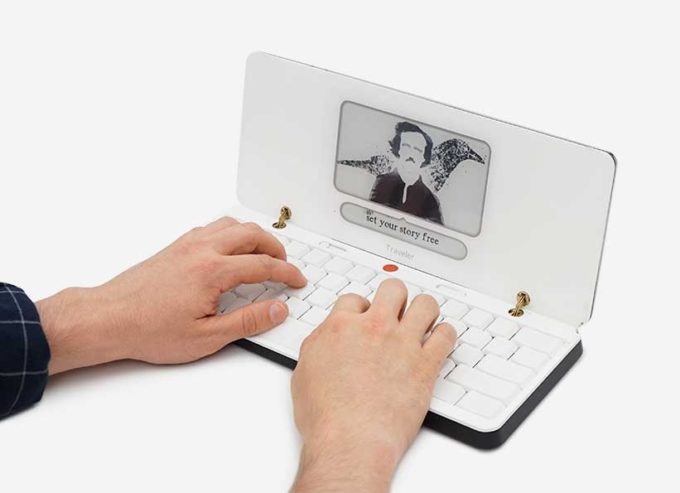 The Traveler has a clamshell design that lets you fold it in half like a notebook, making it easier t slide into a bag. It’s also smaller and lighter than the Freewrite, weighing about 1.8 pounds and measuring about 12″ x 5″ x 1″.

Atrohaus plans to continue selling its original Freewrite typewriter as its flagship product. That model has Cherry MX keyboard switches for a better typing experience than you’ll be able to get with the Traveler. But the new device will be smaller, lighter, and generally easier to use on the go.

It has an E Ink display and Astrohaus says the Traveler gets up to 30 hours of battery life during continuous use, or 4 weeks of battery life when used for about a half hour a day (which means 14 hours of overall use plus a lot of standby time).

Neither the Freewrite nor the Traveler offer any support for third-party apps. These are machines designed for one thing only: writing. But they do support WiFi, allowing you to synchronize your documents to Dropbox, Google Drive, or Evernote.

Astrohaus plans to launch a crowdfunding campaign for the Traveler on October 2nd. The company hasn’t revealed pricing yet, but it’s expected to cost less than the Freewrite, which sells for $499 (about the same price as King Him’s Pomera DM30 E Ink writing device).

via The Digital Writer and Freewrite community