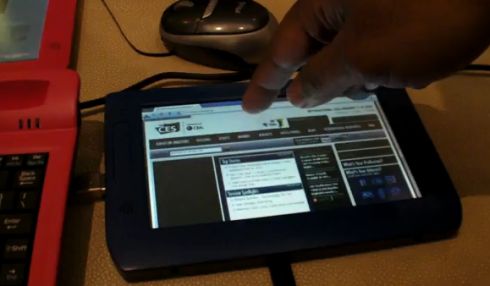 When I got a look at Freescale’s tablet reference design the other day, it was running a modified Linux distribution based on Ubuntu. It seemed reasonably responsive and it was capable of playing HD video. But it’s not the only operating system you can run on the tablet. Charbax from ArmDevices.net got a briefing with the folks from Freescale this week and he’s posted a video of several prototypes running Google Android, the modified Ubuntu, and Google Chromium OS, which is the development version of Chrome OS.

The Google Chrome Operating System isn’t expected to be ready for release until this Fall, but the OS is open source, which means anyone can download it and try it now. Still, this is the first time I’ve seen the operating system running on a tablet with an ARM-based processor.

There’s no touchscreen support yet, so Freescale had to plug in a mouse and keyboard in order to navigate. But the OS seems relatively responsive and the browser had no problems with most web content. Flash isn’t working yet, but Freescale is working on it.

Freescale doesn’t plan to sell these tablets itself. Rather, the company is hoping to see manufacturers build products based on the reference design, using Freescale’s ARM-based processors. The goal is to create a framework for a tablet that could be sold to the end user for around $199. Pop in a 3G module and partner with a mobile broadband provider willing to offer a subsidy, and the up-front price could go even lower. It’s not clear if the product will ever come to market, and if it does, it’s not clear whether it will run any of these operating systems. But Freescale has demonstrated this week that it certainly can run all three.

You can check out the Chromium portion of Charbax’s video below, or hit up ArmDevices.net for an overview of all three operating systems.