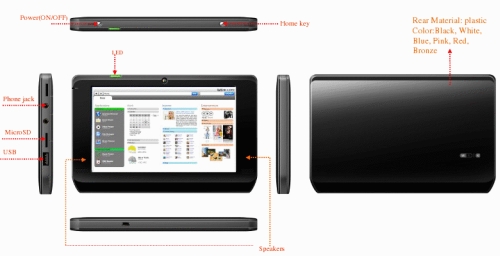 Freescale Semiconductor is introducing a new reference design for a dirt cheap web tablet using an ARM Cortex A8-based processor and running Linux or Google Android. The company will be showing off a prototype at CES this week, and Freescale is looking for hardware partners to build actual products based on the reference design.

Freescale says the tablets can be built for as little as $140, allowing companies to sell the devices for up to $200 while still making a decent profit.

The ARM processor uses less than a quarter watt of power and features a total of 7 processor cores including a floating point processor for math, one for 2D graphics, another for 3D graphics, a third for 720P HD video decoding, and another for processing camera images.

Here’s what you get with the basic prototype:

Freescale says the target market for this tablet are young people between 15 and 25. These are users that are comfortable with on-screen and thumb keyboards and who don’t necessarily demand a full-sized 10-finger QWERTY keyboard which is hard to produce for devices with screens smaller than 10 inches.

Young people are also likely to balk at the idea of shelling out $60/month to connect yet another device to the internet. So rather than bundle the tablet with a 3G module and sell it through cellphone carriers, Freescale plans to make the base model a WiFi-only tablet that people can use around the house or at WiFi hotspots. In other words, you can think of this tablet as more of an oversized iPod Touch than an iPhone.

Of course, if a company decided they wanted to bundle the reference design with a 3G modem and sell it through a mobile broadband provider, Freescale wouldn’t complain. But that would drive up both the up-front and long-term costs.

Another advantage of the tablet form factor is that users haven’t come to expect 7 inch tablets to run Windows XP. One of the reasons I think Linux netbooks have always been a tough sell, even when they have appliance-like interfaces such as Moblin, Xandros Easy Mode, or Linpus Linux Lite, is that if you hand somebody a device that looks like a computer, they expect it to run Windows, OS X, or an operating system they’re familiar with.

Or to put it another way, they might not care what OS it’s running, but they expect to be able to download games, utilities, and other programs from the internet and have them run properly. And they expect it to run Office and other productivity software.

Freescale believes that by creating a device that doesn’t look like a standard computer, and by targeting it at younger users who are already used to switching between multiple electronics devices ranging from gaming consoles to smartphones to computers, the company can keep costs and power consumption down by using a light weight, widget-based Linux interface.

Of course, just because the device doesn’t come standard with a keyboard doesn’t mean that Freescale hasn’t considered the possibility that some users or manufacturers might want one:

The company also hasn’t ruled out the possibility of changing out the display for a capacitive touchscreen that would support multitouch gestures. In fact, the next generation will probably come standard with a multitouch display, but right now that feature would drive up the cost a bit.

I’ll have more details once I’ve had a chance to get my hands on a prototype on the show floor later this week. In the meantime, you can check out more pictures below.