Chip-maker Freescale is launching two new low-power processors with ARM Cortex-A9 cores. While competitors including Qualcomm, NVIDIA, Texas Instruments, and Samsung have been duking it out for dominance in the smartphone and tablet space, Freescale is one of the top makers of chips for eBook Readers, in-vehicle entertainment systems, and other devices that you see everywhere, but not might hear as much about..

The new Freescale i.MX 6SoloLite is a single core processor with clock speeds up to 1 GHz and support for 2D graphics and either E Ink or LCD panels. It has 256KB of L2 Cache, and support for 32bit DDR3 memory. It will likely end up in next-generation eReaders later this year or early next year.

The new chip users less power than the company’s current i.MX508 processor which should offer longer battery life, but it also offers performance improvements which should lead to faster and smoother page turns on E Ink devices as well as improved web browsing. The chip is also cheaper to produce than its predecessor.

Freescale is also introducing the i.MX 6DualLite which is a dual core processor for higher performance operations. This chip also runs at 1 GHz, but has 512KB of LT2 cache and 3D graphics support with 1 shader. 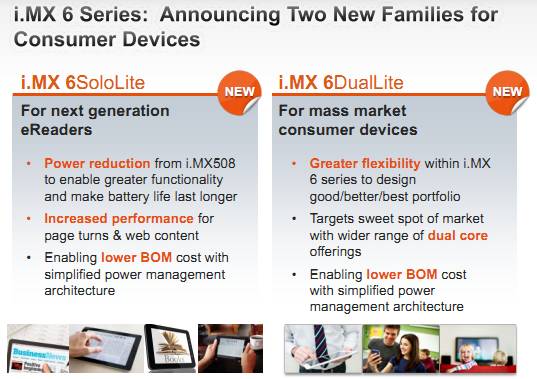 Both new processors are due out in the second half of 2012.