Freescale’s i.MX6 Quad processor is a 1.2 GHz quad-core chip with support 1080p HD video playback and 3D graphics. Tablets and other devices with the chip started shipping recently, and the folks at PandaWill sent me an Ampe A10 tablet with an i.MX6 processor to review.

I’ll have mode details on the tablet soon (it’s a mixed bag — with at least one dead pixel and a bubble under the screen — but a pretty zippy processor and decent looking design). But for now I wanted to share some preliminary benchmarks. Keep in mind, RAM, storage, and other components also play a role in benchmark results, so not all i.MX6 devices will get identical scores. 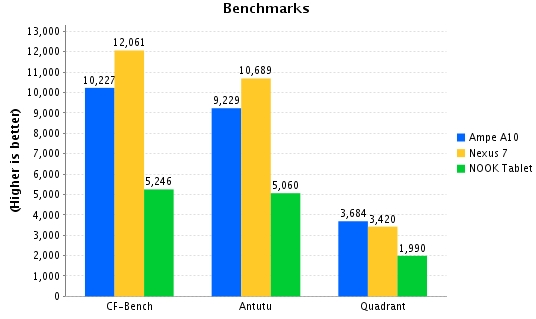 There are a number of popular benchmarking utilities for Google Android. Some of the best look at overall CPU and graphics performance. While they don’t always tell you much about how a tablet will perform in day-to-day usage, they do at least help you get an idea of which tablets are generally faster than others.

In 2 out of 3 tests, the Ampe A10 trailed the Nexus 7… but not by very much. In Quadrant, the Ampe A10 actually came out ahead… but again, not by a very large margin. 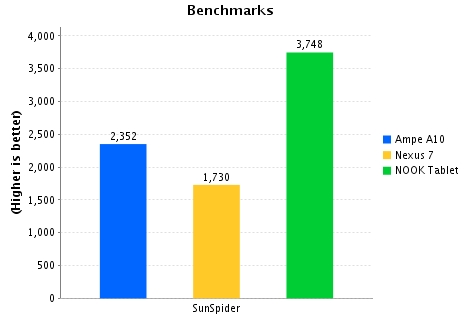 I saw similar results in the SunSpider web-based benchmark which looks at JavaScript performance. For this test, lower scores are better — and the Ampe 10 was faster than the NOOK Tablet, but not as speedy as the Nexus 7.

The Antutu and CF-Bench utilities also include charts that compare the device you’re testing with other products, including many I haven’t had a chance to test. Based on my results, I’m not surprised by the Ampe A10’s placement in the charts.

The HTC One X, Samsung Galaxy S III and other new superphones and top-tier tablets outperform the Ampe A10, but it still scores higher than some relatively recent devices such as the Samsung Galaxy Nexus smartphone.

While the Freescale i.MX6 clearly isn’t the fastest processor on the market (and 4 cores aren’t always faster than 2), it’s certainly not a bad option for low cost devices like the Ampe A10.

This is one of the fastest 10 inch tablets I’ve tested, which is pretty impressive for a device that sells for just $220.

Unfortunately the tablet has a few other quirks that could take a little getting used to. Stay tuned for a more detailed review.