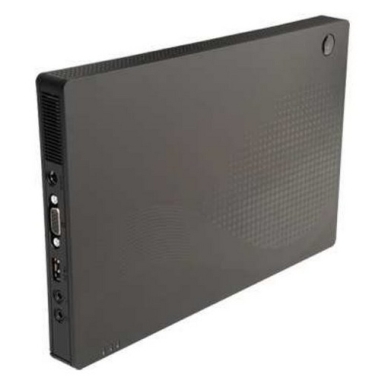 By definition, a nettop is a tiny, low power computer. But the FoxConn Qbox N270 would be relatively thin even for a laptop. The Qbox N270 measures just under an inch thick. It’s about 9.8″ x 6.6″ in length and width. And the whole thing weighs just over 1.5 pounds.

FoxConn isn’t exactly a household name in most parts of the globe. But the Taiwanese PC maker puts together computers that are often rebranded and sold by bigname PC vendors in the west. So it’s possible that we could eventually see the Qbox N270 show up under a different name in the not too distant future.

The nettop features pretty standard specs including a 1.6GHz Intel Atom N270 CPU, 1G of RAm, a 250GB hard drive, 5.1 channel audio, Ethernet, and 3 USB ports. It has a card reader, audio jacks, and a VGA port. NetbookNews.de reports that it will sell for about 199 Euros, or $294 US.