ForYou Digital is a Korean manufacturer that sells a line of Android and Windwos tablets under the Muz brand name in South Korea and acts as an OEM/ODM for companies that want to rebrand the tablets and sell them in other countries.

This is just one of the many companies showing off its products at the Consumer Electronics Show this week, where manufacturers are looking for partners to distribute and resell their products around the globe.

But the show also gives journalists and bloggers a chance to catch up with some of the folks actually manufacturing some of the many low-cost tablets that have been flooding the market in recent years. 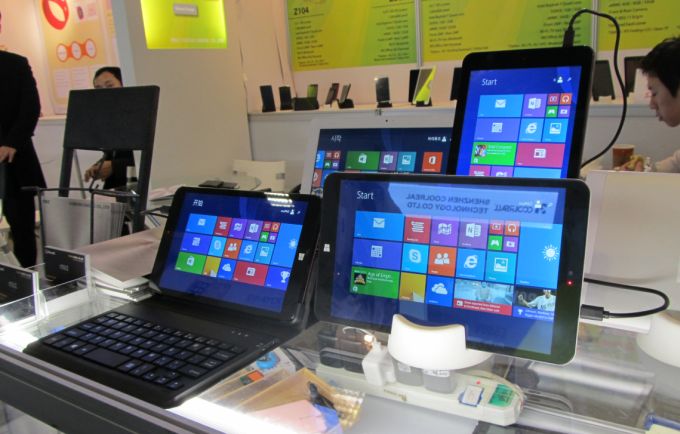 Then Intel lowered the prices of some of its Intel Atom chips and Microsoft dropped the licensing fee of its Windows software. Now tablet makers can slap Windows 8.1 on a tablet with a 9 inch or smaller screen for no cost at all. A Windows 8.1 with Bing license for a 10 inch tablet, meanwhile, costs just about $15.

That allows companies like ForYou to build full-fledged Windows tablets that can sell for around $100 to $200, depending on the size and other features.

Most of the company’s entry-level tablets feature 1GB of RAM, 16GB of storage, and 1280 x 800 pixel IPS displays with decent viewing angles. ForYou says it can also offer higher-resolution screens, more memory, or more storage for partners that want to offer higher-end products.

One of the things I found most interesting from my conversation with the general manager of ForYou Digital is that the most in-demand Windows tablet the company sells is the model with a 10.1 inch display, while the most popular Android tablets have 7 inch screens.

In other words, despite Microsoft’s push to get Windows on devices with a wide range of screen sizes and capabilities, it seems like shoppers (and enterprise customers) are still most interested in using Windows on devices that have screens big enough to handle traditional PC apps such as Office or Photoshop. Tablets with 10 inch screens are also wide enough to let you use a nearly-full-sized Bluetooth keyboard folio case.

Meanwhile Android continues to dominate the 7 inch tablet space, where you’re more likely to run full-screen apps for surfing the web, watching videos, playing games, or performing other activities that might not require viewing more than one window at a time or connecting a keyboard and mouse.

Windows 8.1 does support these sorts of full-screen, “Modern” apps and games. In fact, that’s pretty much the only sort of app you can download from the Windows Store which comes pre-loaded on every Windows tablet. But at this point there are still far more mobile-optimized apps available for Android than for Windows. Where Windows excels in its ability to run desktop apps… like Excel.