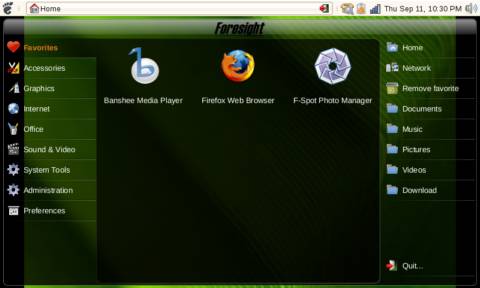 If you’re like me and you just can’t help trying new things with your netbook, the Foresight Linux development team have just released a mobile version of their distribution. At 530mb, this is no stripped-down distro. You’ll find a wide range of software preinstalled and a Gnome desktop tailored for devices with smaller displays – which Foresight has borrowed from Canonical’s Ubuntu Netbook Remix.

Major packages include F-Spot Photo Manager, Firefox, Pidgin Instant Messenger, Banshee Media Player, GNOME Movie Player, and Network Manager (for painless wifi connections). Since it’s a Foresight spinoff, the excellent Conary package manager is included as well. Yet Another Linux Blog has a great writeup of what Conary is and how it works.

They’ve tested Foresight Mobile on the Asus Eee PC and Intel Classmate PC, so owners of netbooks like the MSI Wind or Acer Aspire One should have no trouble getting it running. Two known bugs currently exist on the Eee: software power off does not work, nor does the Eee’s wireless following a resume from suspend. I’ll be posting the results of my test run on the Wind later this week.

Foresight also recently announced a deal that will see their desktop OS ship on all Shuttle KPCs, which you can read more about on Shuttle’s US web site.