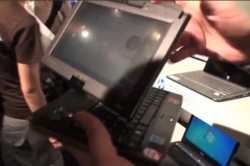 Flybook V5 is an intriguing little device. It’s a convertible tablet style notebook, which means you can use it as a laptop or fold the 8.9 inch display down over the keyboard for use in tablet mode. But unlike the 8.9 inch Asus Eee PC T91, the Flybook V5 has a 1.2GHz dual core Intel CULV processor, supports up to 4GB of RAM, and has a user removable battery that should run between 4 and 5 hours.

Sascha from Netbook News got to spend some hands-on time time with the Flybook V5 and it looks pretty intriguing. Instead of a touchpad, it has a small pointing stick near the top right corner of the keyboard and a series of buttons you can press above the keyboard to perform some actions. The keyboard looks a little small and cramped for my tastes, and it has the same awkward right-shift key placement as many early 7 and 9 inch netbooks. Since the right shift key is to the right of the up arrow, you can be pretty certain that some touch-typists are going to end up hitting the wrong key.

The battery is at the front of the laptop, which is rather unusual for a notebook of this size. That means it’s unlikely that we’ll see an extended battery released for this notebook. But it does mean that the ports can hang out on the back instead of the sides. On the back of the unit you’ll find 2 USB ports, audio jacks, a VGA port, Ethernet and modem jacks, and an ExpressCard slot.

You can check out Sascha’s hands-on video after the break.