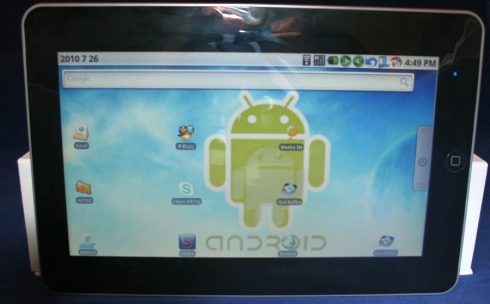 It’s apparently cheap Android tablet week in the US. KMart has started selling a limited number of Augen GenTouch78 tablets for $150. But if the 7 inch, 800 x 480 pixel display and 800MHz processor aren’t doing it for you, Flat Computing has a somewhat sexier model which is still reasonably inexpensive at $285.

The FlatPad A10 has a 10.2 inch, 1024 x 600 resistive touchscreen display and a 1GHz ARM Cortex-A8 processor. This tablet has 256MB of RAM and 2GB of internal memory. It runs Google Android 2.1. The FlatPad has an accelerometer, WiFi support, and a microSD card slot.

The tablet also has a USB host port, a headphone jack, and stereo speakers. It has a 2400mAh battery which the company says is good for up to 5 hours of run time with WiFi on and 7 hours with the wireless turned off. The tablet can reportedly handle 1080p HD video playback.

Flat Computing says a Google Android 2.2 Froyo update will be available in August.

Shanzai.com reports that the FlatPad A10 appears to be a rebranded Zenithink ZT-180 tablet, which sounds about right to me. The main difference (aside from the name change), is that the FlatPad is available for purchase in the US today.