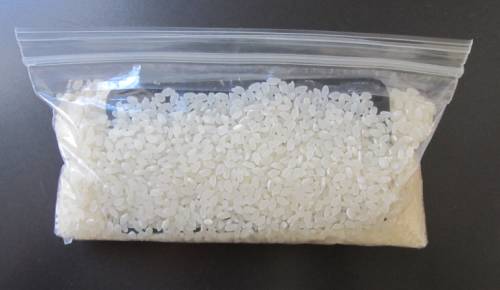 Rice works as a dessicant, which means that if you place a moist object in a bag of rice long enough, the rice should absorb most of the water. Over the past few years I’ve heard repeatedly that you can use this trick to dry out a water-damaged cellphone or other gadget, but I’ve never had an excuse to try this science experiment for myself.

Then on Saturday night my adorable cat decided to give me a good reason by pushing my iPod touch into a glass of water. When I fished it out and wiped it with a cloth, the screen had stopped working. So after spending a few moments debating whether it was worth using up a few dollars worth of the sushi rice in the cupboard to save an iPod touch that would cost $200 to replace, I decided that rice was a more renewable resource.

I filled a small plastic bag with rice, dropped in the iPod touch and left it overnight.

I’ve heard that you should wait 24 to 48 hours before turning a device on after sticking it in rice to dry out, but I’m impatient. I opened the bag, took out the iPod and was very excited to note that the screen lit up when I pressed the power button.

Unfortunately that’s about all that happened. The touchscreen wasn’t responding.

Ideally you should turn off any electronics when trying to dry them out, but at this point it was kind of impossible to do that. As long as there’s a charge in the battery you can reboot an iPod touch without using the touchscreen — but you can’t shut it down. If you press and hold the power and home buttons for a few seconds a “slide to power off” message appears at the top of the screen, but I couldn’t slide.

If you continue to press and hold the power and home buttons, the iPod will reboot, but then it just starts up again. The only way to power it down all the way is to wait until the battery runs out of juice.

At this point I also start to worry that the iPod touch might already be dried out. In other words, while the device still seems to power up and still displays graphics, the digitizer might have been damaged.

It is theoretically possible to repair a broken iPod touch by replacing the front panel, which includes the screen and digitizer. But it’s difficult to do and requires a $90 part (which isn’t currently in stock). So if the touchscreen is really broken, I might need to spend $200 to buy a new iPod touch.

The iPod goes back in the bag of rice. Actually, just to be on the safe side, I changed out the rice.

Hey, I wonder what would happen if I connected the iPod to my computer, performed a system wipe and restored from the lastest backup.

Not much, apparently. It all works — but the touchscreen still doesn’t work.

Let’s drop it back in the bag of rice for now.

Oh, is that a little moisture spot I see looking at me from the camera lens? That can’t be good.

Back in the bag it goes.

Whoo hoo! The touchscreen is working again! Check it out? I unlocked the iPod. I can launch the web browser and other apps!

Hmm… I wonder if the speaker still works. I should try firing up Pandora to see if I can listen to music. Why won’t Pandora launch? Wait… why won’t anything launch.

Oh, the touchscreen’s not working.

Where’s that bag of rice again?

OK, well the iPod touch was almost back to normal. Let’s see how it works after another 12 hours hanging out with its tiny rice buddies…

And… we’re good to go! After spending about half a week in a bag of rice, the touchscreen is fully functional again. I’ve been using the iPod touch for a few hours now and it’s just as responsive to touch as it was the day I first turned it on.

The speakers work as well.

Unfortunately the camera doesn’t want to work at all. I can’t get the camera app to show a picture from the front or or rear camera. It’s possible that another extended stay at the Rice Spa may solve this problem, but I wouldn’t be surprised if the camera circuitry was fried. Further research is needed.

Still, since I don’t actually use the camera on the iPod touch very often (I have a Nexus One smartphone that has a camera with flash and auto-focus… plus a real camera), a few bucks worth of rice and a plastic bag probably just saved me $200.

In my little experiment, I kept the bag sealed. I’m not sure if it made a difference.

Some folks have also had success vacuuming their gadgets to suck out air — apparently using a hair dryer can be dangerous since it could overheat electronics, or blow water further into the crevices. I tried a little vacuuming action on day two or three, but it didn’t seem to make much of an immediate difference.

I’ve also heard that setting an iPod touch on a warm surface can help — some people even turn an oven up to 150 degrees and open the door while resting the iPod on the door. This apparently bathes it in warm air without allowing it to get too hot in a confined area. This sounded risky to me and I didn’t try it at all. If it weren’t fall, I might have tried leaving the iPod and rice out in the sun for a while.

Clearly your results may vary, but if you’ve dropped a phone or other electronic device in a pool of water, it’s at least worth trying to dry it out with rice before shopping for a replacement — especially if your device is no longer under warranty.

19 replies on “Fixing a wet iPod touch (behold: the power of rice)”