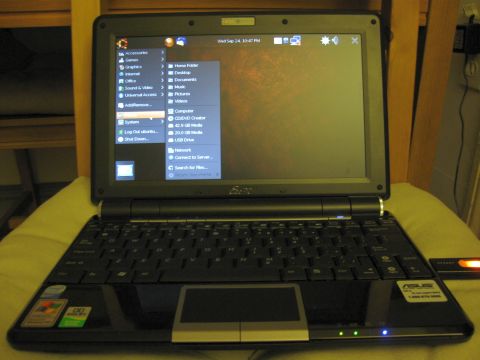 Ubuntu Mobile is not the same thing as Ubuntu Netbook Remix, which is designed for netbooks, or small, low power laptops with full keyboards. Ubuntu Mobile is optimized for devices without keyboards. it has nice big buttons that are easy to press with your fingers or a stylus and an on-screen keyboard for typing.

While Ubuntu Mobile wasn’t designed with netbooks in mind, my first thought was to see how it runs on a netbook. You can find the answer, plus a few more pictures after the break.

That’s where I ran into my first problem. For some reason, I couldn’t manage to mount my flash drive using Ubuntu Eee, so decided to try a Windows utility. Since the disc image was hanging out on my Linux desktop, that required two things:

Once both of those things were done, I copied the dd.exe file to the same directory as the ubuntu-mobile.img file and followed these steps:

And that’s it. Once that’s done, all you need to do is reboot the computer with the flash drive plugged in and choose the flash drive from your boot menu. If you’re using an Eee PC, you get to the boot menu by hitting ESC when the Asus splash screen appears during bootup.

On my Asus Eee PC 1000H, it took just a few moments to boot up an Ubuntu desktop. There’s an icon on the desktop that you can click to install Ubuntu Mobile, but all I wanted to do was poke around.

What works and what doesn’t

The first thing I noticed was that the WiFi doesn’t work. Ethernet works just fine, so I grabbed a cord and plugged the laptop into the router. But without working WiFi drivers, there’s no way I’ll be switching to Ubuntu Mobile full time just yet. Of course, it shouldn’t be too hard to get the WiFi working on your own, but this is an early release. I’m still hoping Canonical adds support for Asus Eee PC hardware in a future version.

The operating system comes bundled with the software you would expect. It has the Thunderbird email client, Pidgin Instant Messenger, OpenOffice.org office suite, the Totem Movie Player and Rhythmbox Music Player. It also has a CD ripper and disc burner, although these are of little use on most UMPCs and netbooks thanks to the lack of an optical drive. Sure, you could plug in a USB CD/DVD drive, but I really think Canonical should think about leaving these apps out of the default installation.

Instead of Firefox, Ubuntu Mobile ships with a custom web browser called the midbrowser. It’s designed to both to maximize your screen real estate and to provide easy touchscreen navigation. 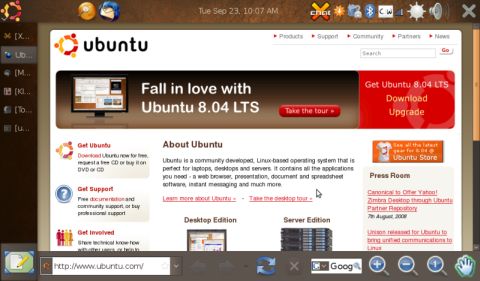 Other applications have also been optimized for devices with 1024 x 600 pixel or smaller displays as well. All applications launch in full screen mode, even the calculator. And applications lack the usual toolbar with the minimize, maximize, and close buttons. Instead, you can close applications by hitting the X button in the top panel.

But for some reason, Ubuntu Mobile includes a rather old fashioned, heirarchical start menu much like the one you’d find in Windows or the full desktop version of Ubuntu. I would have thought that the ume-launcher used in Ubuntu Netbook Remix would have made even more sense for touchscreen devices. 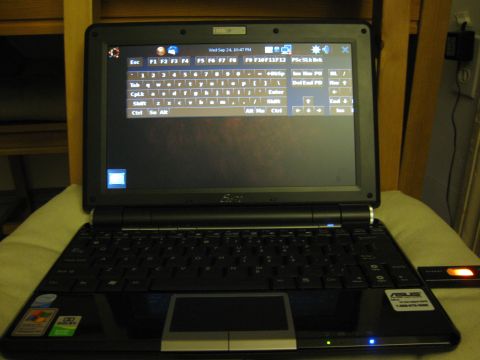 The on-screen keyboard is a nice touch for devices that actually have touchscreens. Since my Eee PC 1000H does not, I had no use for it. But that didn’t stop me from tapping out a few things with it using the touchpad. You can pull up or hide the on-screen keyboard by hitting an icon in the top panel.

I’m glad to see Canonical working on a custom version of Ubuntu for small screen devices. While Ubuntu Netbook Remix includes a few tweaks to make it easier to launch programs on a device with limited screen real estate, Ubuntu Mobile goes a bit further by completely changing the way you interact with the desktop. The GNOME interface has been completely redesigned, and applications have been tweaked to be easy to use on low resolution displays.

While Ubuntu Mobile is designed with small touchscreen devices in mind, I could certainly see some netbook users choosing to use this OS as an alternative to Linpus Linux Lite (Acer’s Linux distro of choice) or the version of Xandros that Asus ships with Linux versions of the Eee PC.

You can read more about Ubuntu Mobile and see a video of the OS in action on a Samsung Q1 at UMPC Portal.