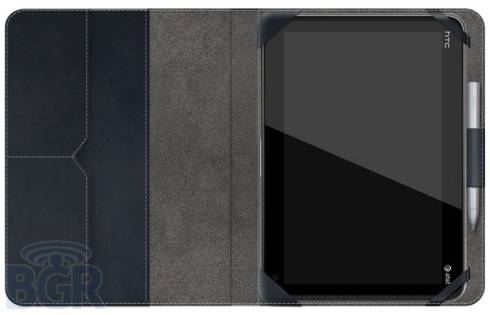 The HTC Puccini tablet features a 10 inch display and works with a digital pen or finger input. HTC hasn’t yet confirmed the existence of the tablet, but we’ve been hearing rumors about it for weeks. Now we have a first look at some pictures thanks to the folks at BGR.

The tablet is expected to have a 1.5 GHz processor and run Google Android 3.x Honeycomb with a version of HTC’s Sense software running on top and bringing custom widgets, contact management, and other features to the tablet. The Puccini is also expected to have an 8MP camera, sterso speakers, and a 4G LTE radio.

HTC currently offers a 7 inch tablet called the Flyer which also works with a digital pen. But the Flyer runs Google Android 2.3 instead of Honeycomb. The Flyer is a pretty great device even though it runs a version of the Android operating system designed for phones rather than tablets. But it’s a little on the expensive side. It will be interesting to see how much the HTC Puccini costs when it hits the streets.