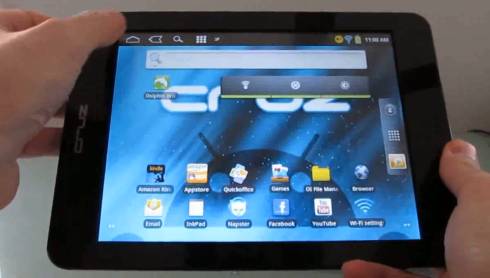 Velocity Micro has been producing low cost Android tablets for the last year or so, but the company’s latest tablets are some of the best yet. They feature capacitive multitouch displays and Samsung 1 GHz ARM Cortex-A8 processors. Most important, they’re actually reasonably fun to interact with.

The company loaned me a Velocity Micro Cruz T408 tablet and a Cruz T410 tablet for review purposes, and I wanted to post some initial impressions.

Update: The displays are LCDs with glass — although there may be plastic over the T410 screen.

The larger screen also makes the T410 a little larger and heavier than the T408, but otherwise the two tablets are nearly identical. Both feature 512MB of RAM, 4GB of storage, 802.11b/g/n WiFi, accelerometers, microSD card slots, and front-facing cameras.

The good news is that the Cruz tablets have handled almost every third party app I’ve thrown at them so far, whether those apps came from the Amazon Appstore or not. You can try transfering APK app installer files from another Android device or try downloading apps from other third party app stores such as SlideMe or GetJar.

The tablets feature volume and power buttons — but that’s about it for physical buttons. There are no buttons for home, menu, or back functions. Instead there’s a persistent toolbar at the top of the screen with soft buttons for those functions. These work reasonably well, but sometimes it’s awkward to reach all the way to the top of the screen. The menu icon also looks an awful lot like the icon for opening the full list of Android apps, which caught me off guard at first.

I really like the 8 inch model so far. Sure, it doesn’t have the fastest processor around or the highest resolution display. But it’s small and light and works pretty well for reading eBooks, surfing the web, or playing games.

I need to spend more time with the 10 inch model before I really make up my mind — but so far the unusual screen shape and resolution is throwing me for a curve. While 1024 x 600 pixel displays are common on netbooks, it’s an unusual combo for an Android device  and it makes the tablet feel a bit too long to use comfortably in portrait mode.

More importantly, while the two tablets are nearly identical in most respects, the 10 inch model costs $100 more than the 8 inch tablet.

At about $200, the T408 is priced similarly to the Amazon Kindle Fire or Lenovo IdeaPad A1 and it fills a similar niche. But at $300, the Cruz T410 seems a bit expensive for a tablet running Android 2.3 Gingerbread.

I’ll have more details and full reviews once I’ve spent more time with the tablets.