Rockchip is showing off a developer kit for its first 64-bit, octa-core processor at the Consumer Electronics Show this week.

The RK3368 kit includes a the company’s new processor hooked up to a series of boards powering a touchscreen display running Android 5.0 Lollipop. 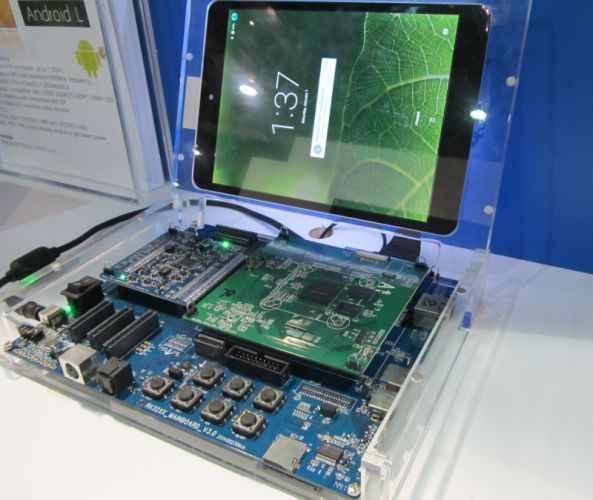 When I actually tried to use the tablet, it felt incredibly sluggish — but I can’t tell if that’s because the processor is a brand new chip and the company is still working to get Android to run smoothly on it, or if this was just the result of using a demo model left out in the open at a trade show where any number of folks had already used it and might have mucked things up a bit.

Anyway, it’s probably a bit early to say what the real-world performance of the RK3368 processor will be, but Rockchip says it supports 4K H.265 video playback at 60 frames per second as well as OpenGL ES 3.1, OpenCL 1.2 and DirectX 3.9 graphics.

The processor features eight ARM Cortex-A53 CPU cores which can run at speeds up to 1.5 GHz. While the Cortex-A53 is the lower-power member of ARM’s Cortex-A5x family, it is a 64-bit chip based on ARMv8 architecture which means it should theoretically offer a performance boost over the Cortex-A7 chips that are more common today.