This is shaping up to be a busy year for mini-laptops, with new models coming from GPD, Chuwi, and One Netbook. The One Mix 3 Yoga is the first out of the gate, and it’s a little laptop with an 8.4 inch touchscreen display, a 360-degree hinge, and Intel Amber Lake processor.

It went up for pre-order in May, and should begin shipping in a few days. GeekBuying is taking orders for $760 and up (you can save $10 when using the coupon code BELWFNVY).

The folks at One Netbook sent me a demo unit to try out, and while I won’t have a full review for a little while, I wanted to share some initial impressions. 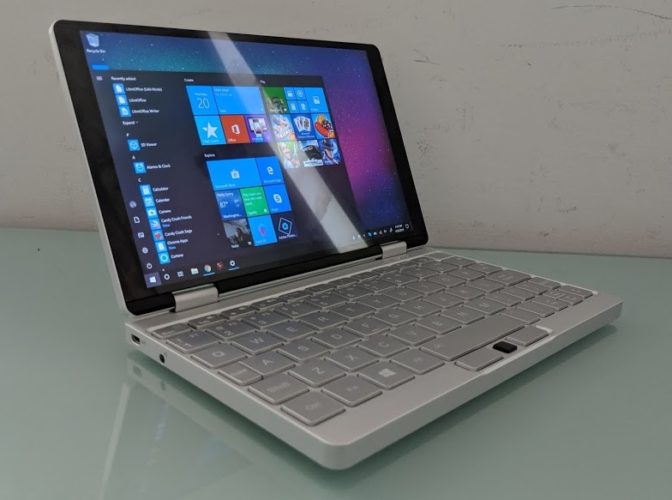 The model I’m testing is the entry-level version with an Intel Core m3-8100Y processor, 8GB of RAM, and 256GB of solid-state storage. One Mix also sent me a digital pen, which is an optional accessory that sells for $20.

One Netbook also offers a higher-priced One Mix 3S Yoga with a Core i7-8500Y processors and double the memory and storage. It’s expected to start shipping in July for folks willing to spend $1250 on a laptop that’s probably not going to be anyone’s primary computer.

I say that mostly because the appeal of mini laptops like the One Mix 3 Yoga is their portability, not necessarily their performance. While the 5 watt Intel Amber Lake dual-core processors that power these little laptops perform admirably given their power constraints, you’re probably not going to want to use them for heavy duty tasks like video editing or mining Bitcoin.

While I didn’t have any trouble web surfing, watching videos, or editing documents on the One Mix 3 Yoga, I haven’t had time to test performance extensively yet. I will note that it does get pretty warm to the touch if you’ve been using it for a while.

The little computer is not fanless, but if you’re want it to run silently, you can press Fn + Del to disable the fan (and make the computer even hotter.

While the One Mix 3 Yoga isn’t exactly a speed demon, it is a surprisingly usable device thanks to a few key features that set it apart from the company’s earlier models like the original One Mix Yoga and One Mix 2S Yoga. 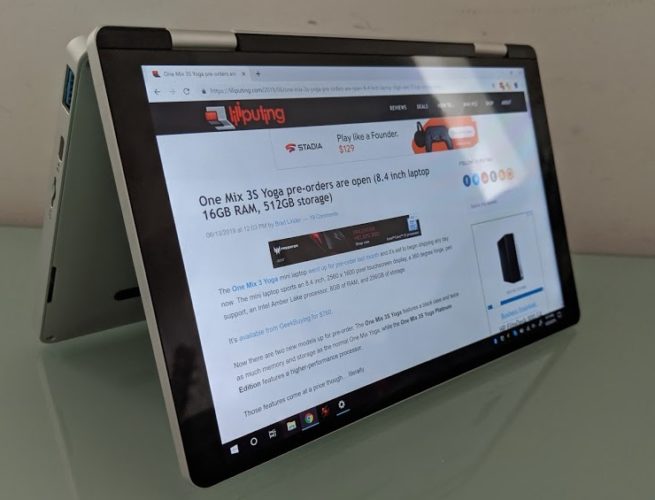 Aside from the larger screen and newer processor, the biggest change is the larger keyboard and new key layout. 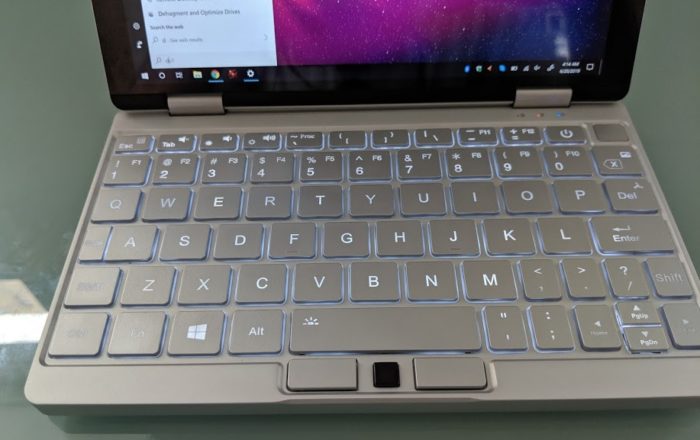 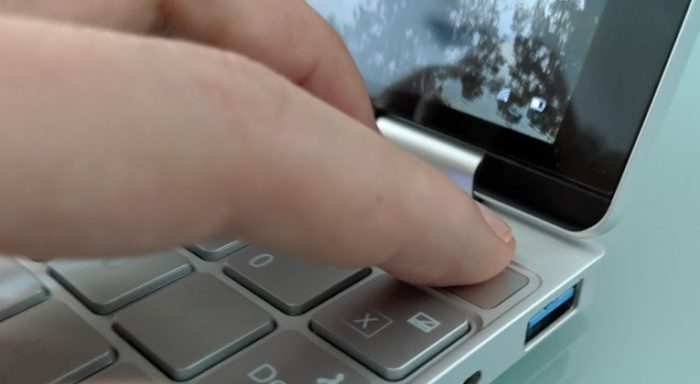 There are still a few oddities — the Tab key is above the 2 and the apostrophe and colon keys are next to the space bar instead of next to the L. So it takes me a moment to find those keys when I’m looking for them, but I’ve only been using the laptop for a few hours at this point. I suspect I’ll get used to the new layout eventually.

For now, I find I can type at up to 80 words per minute, which is a little slower than I’d type on a full-sized laptop, but still pretty good for a device that’s this small.

Flip the screen back 360 degrees and the One Mix 3 Yoga makes a pretty decent Windows tablet. At 0.6 inches thick, it’s a bit chunky for a tablet, but weighing just 1.5 pounds, it’s pretty comfortable to hold with one hand while watching videos, playing games, or reading eBooks or news articles. 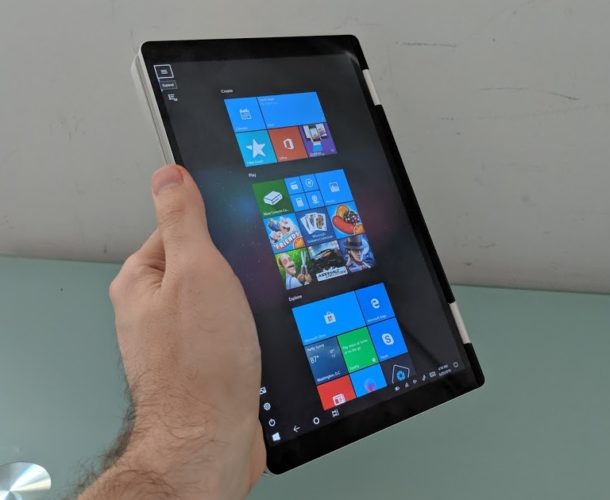 Update: It does fit in the front pocket of my jeans… as long as I don’t plan to sit down. or bend my legs too much. My back pocket, not so much.

The One Mix 3 Yoga comes with a compact 30W USB Type-C charger. The cable it comes is only about 3 feet long, so you may need to buy a longer cable if you don’t plan to keep the computer right next to a wall jack while charging. But just about any USB-C cable should work.

You can also charge the laptop from a USB-C power bank. Unsurprisingly I had no problems charging it by plugging in a 45W power bank that I use to charge my HP Spectre x360 laptop. But I was also able to charge it by running a USB cable from a 5V/2.1A power bank which doesn’t provide enough power to charge my HP laptop. 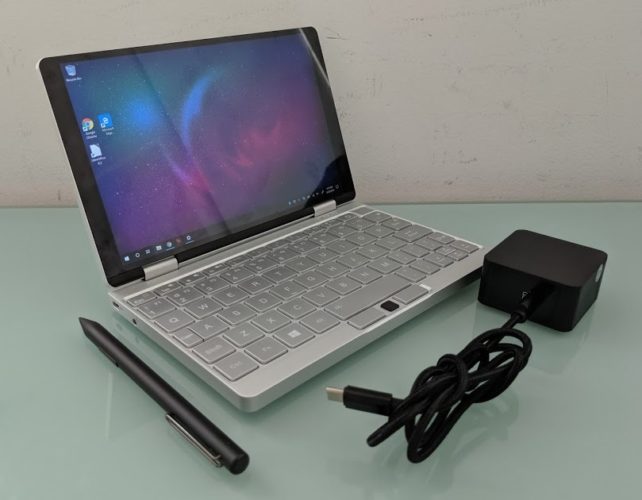 Next to the USB Type-C port, there’s a USB 3.0 Type-A port and a microSD card reader, making it easy to connect accessories and/or additional storage. And on the left side of the One Mix 3 Yoga, there’s a micro HDMI port and a headphone jack.

The last thing I tested today was Ubuntu 19.04 Linux — it boots, but you have to jump through a few hoops and not everything works perfectly.

First, you’ll want to prepare a bootable USB flash drive, then plug it in, turn on the computer, and hit the Del key during startup to enter the computer’s UEFI/BIOS settings. Note that the settings will appear in portrait orientation, so you may have to tilt your head sideways to read the menus.

Next you’ll want to change the boot priority so that you can boot from a USB flash drive. Exit and save settings and you should be greeted with the GRUB boot menu asking if you want to install Ubuntu (or whatever operating system you’re trying) or try without installing. Choose the latter option.

On first boot, the screen orientation was upside down. I was able to fix this by opening a terminal window and typing “xrandr -o left” without the quotation marks.

After that, I connected to the internet, fired up a web browser, and played some YouTube videos. Audio, video, keyboard shortcuts, and WiFi all seem to work. The touchscreen and digital pen do not seem to be supported out of the box. So if you’re planning on buying a mini laptop specifically to run Ubuntu on it, you may have some troubleshooting to do.

Update: Wondering what it looks like under the hood? There appears to be one open PCIe slot, but that’s about it when it comes to easy options for upgrades.

I also confirmed my suspicion that there’s only a single mono speaker, despite the fact that there appear to be two speaker grilles in the case.

I’ll have more details on battery life, performance, and overall value in the coming days. I’m also planning to peek under the hood and see what it would take to upgrade or replace the internals.