Lenovo’s ThinkPad 11e is an 11.6 inch notebook aimed at the education market. It’ll be available in the coming months with prices starting at $349 for a Chromebook with an Intel Celeron Bay trail processor and going up to $699 for a Windows convertible tablet with an Intel Haswell processor.

Both Windows and Chrome OS models will be available either as clamshell-style notebooks or as Yoga-style convertibles, allowing you to fold the screen back 360 degrees until it’s opposite the keyboard so you can hold the computer like a tablet.

I got a chance to check out an early prototype of the ThinkPad 11e Yoga Chromebook which should be available for $429 starting in June. 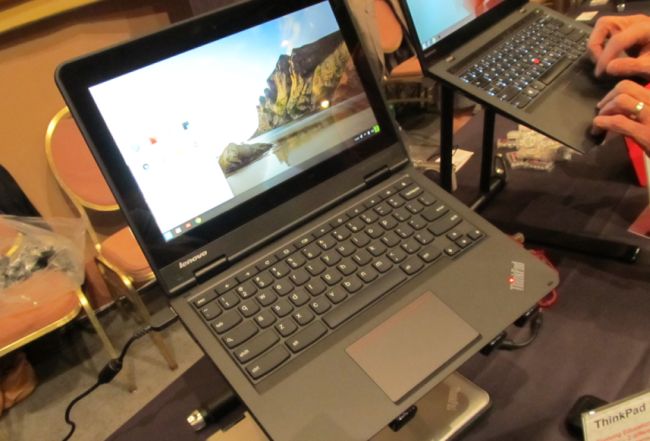 It weighs about 3.3 pounds and measures less than 0.9 inches thick, and has a tough plastic case designed to take a beating from kids in the classroom. Lenovo says the lid and ports have been reinforced to stand up to the kind of abuse that little hands can offer, and the keyboard has been ruggedized. The computer also features a Gorilla Glass screen. 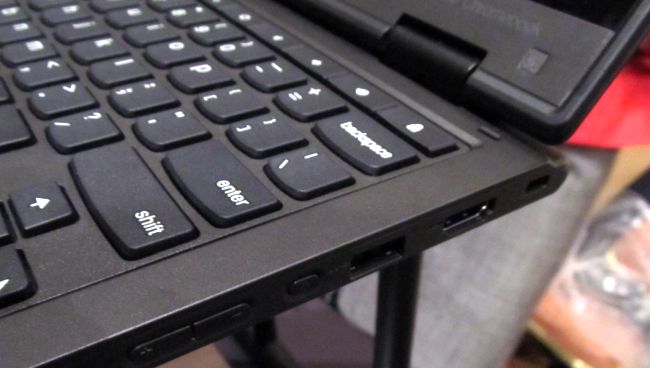 These laptops are the first ThinkPad models without any sort of TrackPoint system, but Lenovo says that’s because teachers have suggested that the fewer parts there are for kids to pick off, the better — so there’s no pointing stick in the center of the keyboard.

While the model I saw wasn’t quite the finished version, the keyboard felt pretty good and while the tablet definitely had a plastic feel it feels pretty sturdy. 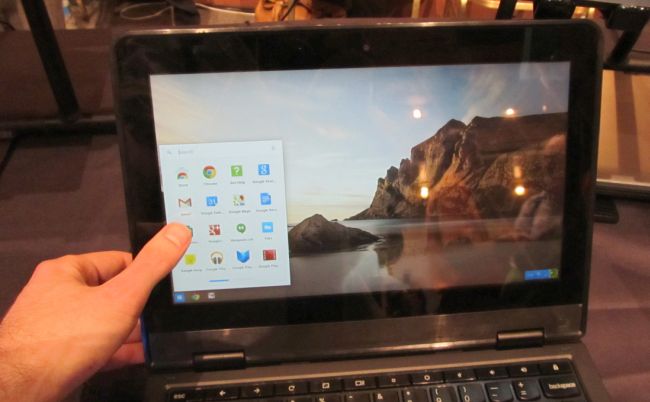 The touchscreen was pretty responsive on one unit I tested (although touch didn’t work as well on the unit I initially tried to shoot on video), and now we finally know why Google’s been working to add an on-screen keyboard to Chrome OS. While it’s a nice feature to have on touchscreen laptops like the Chromebook Pixel and Acer C720p Chromebook, it’s practically a must-have feature on a device like the ThinkPad 11e Yoga Chromebook where you’re expected to use the device in tablet mode from time to time.

The clamshell version of the ThinkPad 11e Chromebook won’t have a touch panel. And there are a few other variations as well.

Windows models will have Ethernet ports, but the Chrome OS models will not. And the Core i-series Haswell models will get around 6 hours of battery life instead of the 8 hours you get with Bay Trail models.

Lenovo’s ThinkPad 11e series Windows and Chrome laptops are all coming from the company’s education division. But that doesn’t mean you have to be a school or a student to order one. If you’re hoping to get your hands on one of the first Chrome OS tablets, you’ll be able to buy one from Lenovo for $429 starting in June. Windows models should be available in late April or early May.