The Kano Computer Kit is a kid-friendly computer designed to teach kids not only how to turn on a computer and play games, but also how to code and how to understand hardware.

Each kit includes a Raspberry Pi computer, a wireless keyboard and touchpad, a case, speaker, cables, and easy-to-understand guides for getting started, as well as stickers for decorating the case. 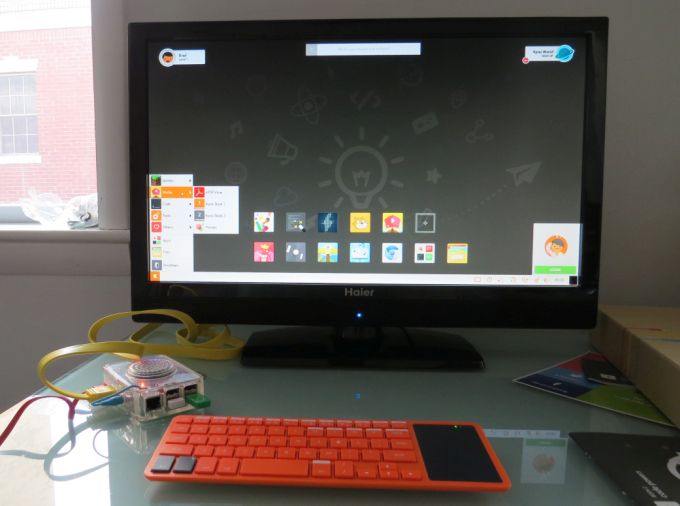 The new Raspberry Pi 3-based Kano Computer Kit is set to begin shipping in June. But Kano sent me an early version to test… and while I normally don’t do unboxing and first look videos anymore, a large part of what makes this kit special is just how easy it is to use right away.

So after I started opening the box and realized just how user-friendly the unpacking and setup process is made to be, I put everything back in the box and shot this video:

Even before you open the box, you’re greeted with pictures on the box, showing what the Raspberry Pi looks like and how the accessories plug into it. 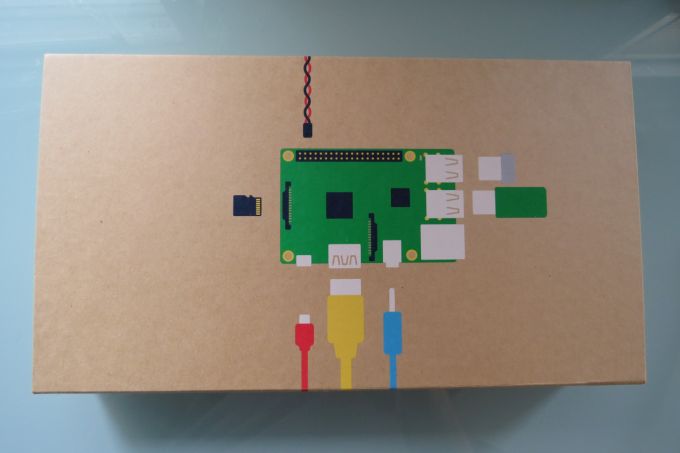 Open up the box and you’ll find  a Raspberry Pi 3, a clear acrylic case with a speaker built into the top, a power adapter, USB WiFi adapter, a microSD card (and adapter) with Kano’s operating system pre-installed, a power adapter, and a small wireless keyboard with a built-in touchpad.

Note that the WiFi adapter will not come with the version of this kit that ships in June, because the Raspberry Pi 3 has built-in support for WiFi and Bluetooth. This pre-release kit I was sent is basically a v2 kit with a Raspberry Pi 3 instead of a Raspberry Pi 2. It works just fine without the USB wireless dongle. 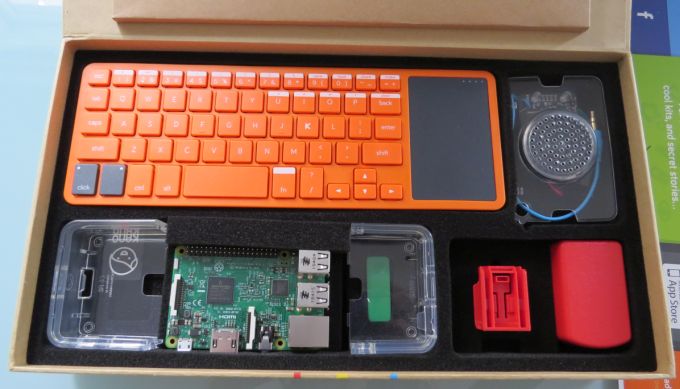 The are also HDMI and micro USB cables hiding out under the keyboard.

As for that keyboard, it’s clearly designed for small children. The keys are pretty small and while I can type on it, I do need to glance down from time to time to make sure my fingers are in the right place.

The keyboard comes with a USB dongle that you plug into the Raspberry Pi. But it also supports Bluetooth, so you can use the keyboard with most phones, tablets, or computers that have Bluetooth. 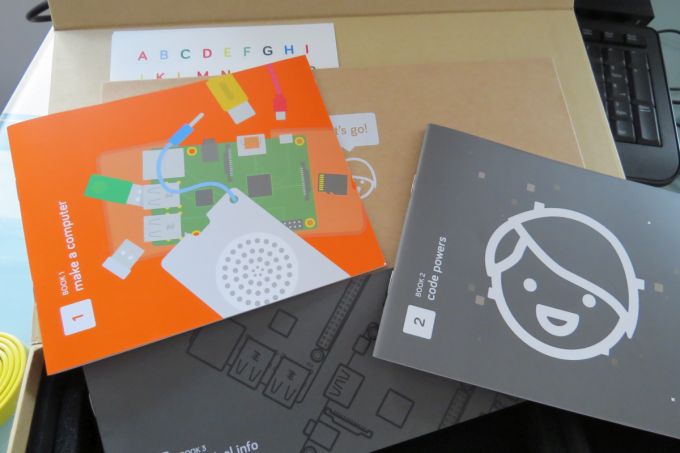 Kano includes a booklet with step-by-step, illustrated instructions for assembling the computer (by inserting the microSD card, snapping the case together around the Raspberry Pi, plugging in the speaker and closing the top, etc), but almost every step is intuitive enough that you might be able to do it without the guide.

Then again, this book is aimed at kids who might have little to no experience with computers, so I’m not exactly the target audience.

One thing that isn’t necessarily intuitive is figuring out which pins to connect the speaker to, but the book walks you through that process. 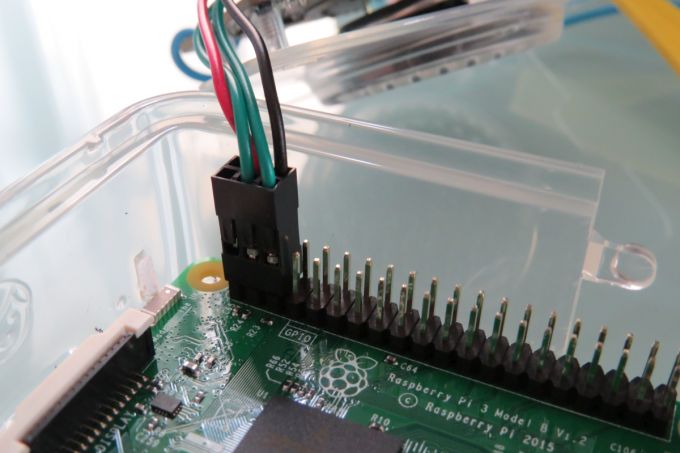 When everything is snapped together, plugged in, and powered up the computer will boot into Kano’s custom, education-focused operating system designed to teach kids to code and interact with computers. The first time you start the PC, you’ll have to answer a few questions and follow a few instructions to go through a game-like walkthrough that teaches you to use the keyboard and touchpad.

Once you’ve completed those steps, you can explore the pre-installed apps for creating music or pictures by coding, surfing the web, or… well, watching YouTube videos. 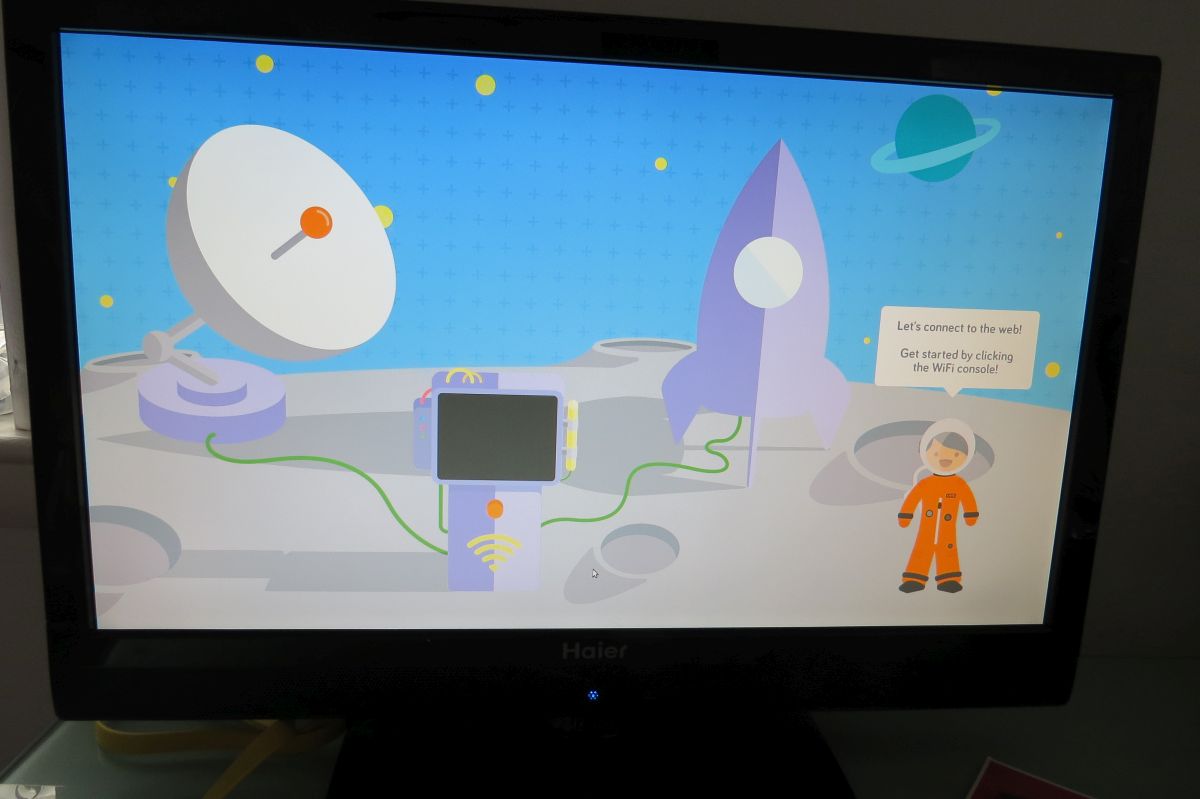 There’s a heavy emphasis on learning to code, with software such as the Scratch drag and drop programming tool, Sonic Pi for creating music by writing code, and other games and activities that emphasize not only playing, but learning to create and modify software. 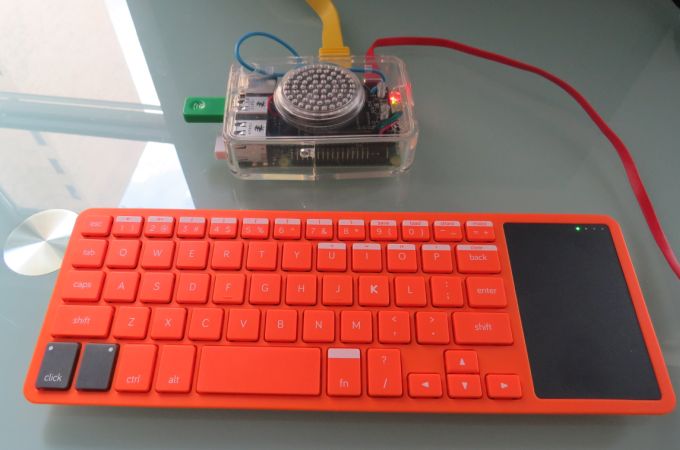 I’ll be testing the Computer Kit a bit more in the coming weeks before rendering a final verdict (and I want to take the opportunity to try a few different operating systems while I’ve got a Raspberry Pi 3 handy as well). But at first glance, the Kano Computer Kit is a pretty intriguing platform for teaching kids not only how to use computers, but how to think like a programmer.

Priced at $150, the Kano Computer Kit certainly isn’t the cheapest way to get your hands on a Raspberry Pi 3, which sells for $35 on its own. But the kit includes everything you need to get started including a keyboard, cables, wireless card, speaker, case, and storage.

Already have some of those things? Then you can just download the Kano OS software and give it a try on your existing system.

Kano also sells optional accessories such as a Screen Kit or spare keyboard.