Intel says its new processors with AMD graphics will be available in early 2018. But it looks like someone’s already testing some early samples, because a few photos of what looks like an Intel NUC mini PC motherboard with an Intel+AMD chip are making the rounds.

Among other things, this seems to confirm that the new chips are destined for compact desktop computers as well as thin-and-light laptops. 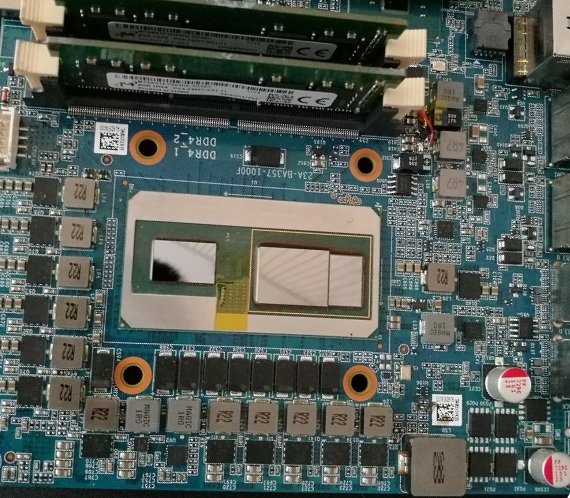 The upcoming chip or chips are expected to feature a custom GPU developed by AMD and an Intel Core H-series quad-core processor. The idea is to provide higher performance graphics than you’d get from a CPU with integrated Intel HD graphics, while taking up less space and using less power than a typical CPU + discrete graphics solution.

It remains to be seen just how competitive the new chip will be in terms of price or performance. This year AMD rival NVIDIA launched the Max Q platform which allows PC makers to build thin, light, and relatively low-power laptops with NVIDIA graphics.

But this could just be a first step for Intel. The company also recently hired AMD’s former GPU chief and announced that he’ll be heading up a new “Core and Visual Computing Group” that could lead to new GPUs for use in laptops, desktops, IoT devices, and other applications that can leverage GPUs for not only graphics, but also other tasks that rely on parallel processing such as machine learning, computer vision, or cryptocurrency mining, among other things.

via Hexus and Guru3D