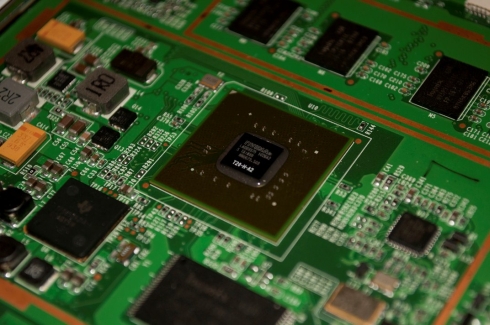 The Notion Ink team is getting ready to ship the Adam tablet soon. It will be one of the first Android tablets to ship with an NVIDIA Tegra 2 processor and an optional Pixel Qi transflective display which is designed to be readable both indoors and outdoors in direct sunlight. A few days ago Notion Ink founder Rohan Shravan posted photos of some of the first production models of the tablet, and today he went a bit further and showed what the system board and part of the case looks like when you open up the tablet.

The photo above shows the motherboard with an NVDIIA Tegra 250 processor as well as the RAM and flash storage soldered onto the mainboard. You can see the chassis as well as a weather widget from the custom user interface at the Notion Ink blog.

Folks also seem to be making a big deal of the fact that Shravan says the tablet will ship with a “full office suite,” but it’s not clear at the moment if we’re talking about an existing app like QuickOffice or ThinkFree which let you view and edit documents on Android, or a different app altogether which might have been designed from the ground up.

Shravan does say there will be about 20 custom widgets designed specifically for the Adam tablet, so the company is clearly spending some of its time on software development. Notion Ink has also worked out partnerships with some media providers to make digital media such as comic books available on the tablet.

25 replies on “First look inside the Notion Ink Adam tablet”