Huawei recently announced that the MateBook X Pro is coming to America, and it’s up for pre-order from B&H.

The company sent me a top-of-the-line $1500 model to test, and while the computer ships with Windows 10, one of the things I was curious to find out how well it handles Linux. The computer does have a few unusual features after all, including a camera that hides away in the keyboard when it’s not in use. 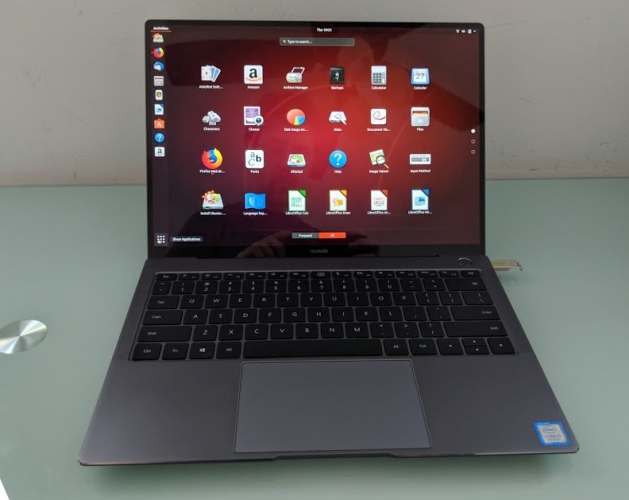 It’s pretty easy to boot from a USB device. The MateBook X Pro has one USB Type-A port and two USB Type-C ports. Just plug in the device you want to boot from, hit the power button, and press the F12 key during startup to get a boot menu.

I selected the drive I wanted to boot from and Ubuntu was up and running a moment later. The MateBook X had no difficulty connecting to my WiFi network and I was able to surf the web, play audio and video, and install applications right away.

The volume, brightness, and keyboard backlight shortcuts on the keyboard were immediately recognized. But a few Fn keys like the microphone mute and wireless toggle didn’t work.

The camera worked about as well under Linux as it does in Windows… which is to say that it’s awkwardly located and provides a nice view of your hands while you’re typing or the underside of your face when you’re not.

But loading the Cheese application immediately activated the camera, allowing me to snap a picture… even before I pressed the button that makes the camera pop out. Sure, the picture was black, since the camera was pointed at the inside of the keyboard. But it worked.

Pop up the camera and you can get slightly more flattering shots, and there’s an LED light that shines to let you know when the camera is active. Closing Cheese made that status light turn off, indicating that the camera was no longer in use.

One thing to keep in mind about the MateBook X Pro is that its 3000 x 2000 pixel display is very, very sharp. Most of the time I’ve kept the Windows DPI scaling set to 175 percent or 200 percent, because anything smaller makes text and images too difficult to see.

Ubuntu hasn’t always played well with high-DPI displays in the past, but the out of the box experience was pretty good, with graphics and text scaled to 200 percent, which was pretty comfortable. You can open the display settings and switch to 100 percent or 300 percent scaling, but I wouldn’t really recommend either option since they make text way too small or big, depending on the setting.

The touchscreen works too… for the most part. It recognized touch input, allowing me to move an on-screen cursor and tap app shortcuts, among other things. But I noticed that tapping the “Show Applications” icon made the app list expand and disappear quickly. I think it’s registering single-taps as double-taps.

Fortunately the touchpad supports multi-touch gestures, so it’s easy to tap, scroll, and perform other basic actions that way.

Update: Our full review of the Huawei MateBook X Pro is now live: