Microsoft Windows 8 will includes a radically redesigned user interface for use with tablets and other touchscreen computers. It’s focused on touch-based gestures and large tiles and looks a lot like Windows Phone 7. But users will also be able to use the operating system with a more traditional desktop operating system look and feel. In fact, the non-touch user interface that we’ve seen so far looks a lot like Windows 7.

But there will be a few user interface tweaks. While Microsoft hasn’t many details about text input on the new operating system yet, YouTube user adelayedperson has posted a video showing what appears to be the text input panel on a pre-release build of Windows 8.

Like Windows 7, the new operating system will allow users to choose between an on-screen keyboard and a handwriting recognition panel. But the keyboard has been redesigned with much larger keys, giving the input panel a more touch-friendly design. If you’ve tried tapping out text on a Windows 7 tablet with a 10 inch screen, you’ll know that the experience is currently far from perfect. 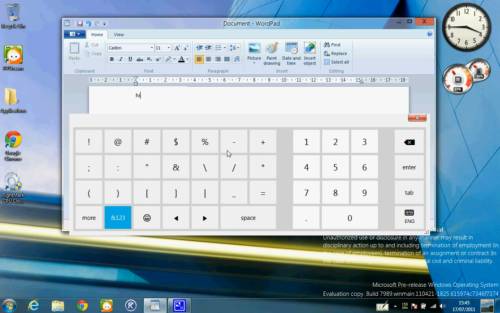 Part of the reason there’s room for larger keys is because the number keys have been removed from the default keyboard and pushed into a secondary window. This means you’ll need to press more keys to enter numbers or many other symbols, but if you’re primarily interested in text entry, the trade-off is probably worth it.

Another view shows almost nothing but emoticons.

While the video shows the keyboard in the center of the screen it looks like you should be able to resize the keyboard or drag it to a different position.

You can also use a split-screen keyboard with letter or other characters split between the left and right sides of the screen. This makes thumb-typing a lot easier.

If the videos disappear from YouTube, you can still check out some screengrabs below.