Toshiba is launching 3 new Android tablets this summer, with prices ranging from $300 to $600. While the cheapest model is basically a tablet with last year’s specs, but a new low price, the company’s higher-end tablets offer an interesting range of features.

Meanwhile the $600 Toshiba Excite Write is basically a Pro with the addition of an active digitizer, a digital pen for writing and drawing, and custom software to take advantage of pen input on an Android device.

After spending a little time with the Excite Write tablet this week, I’m pretty impressed with what Toshiba’s done. I’m just not convinced that the $600 tablet has mass appeal. It’s more likely to find a market as a niche product for professionals in creative or business areas. 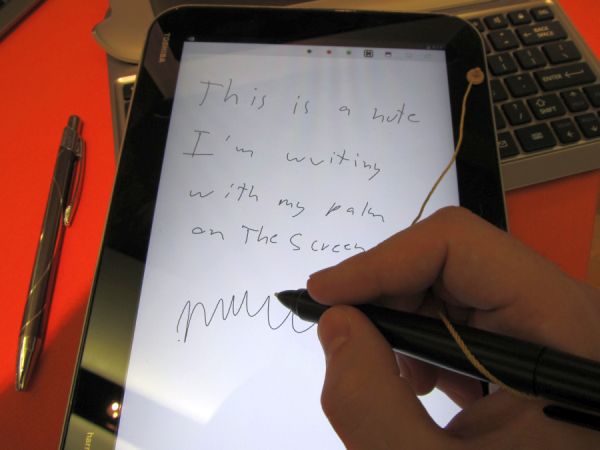 The Toshiba Excite Write comes with a pen that actually feels like a pen. It’s nice and big, but too thick to slide into a hole in the tablet case. Instead Toshiba put a little notch on the side of the tablet which you can use to tie a lanyard to the tablet so you don’t lose it.

While that’s not a perfect solution for storing the pen while it’s not in use, I do find it easier to write on a tablet with a large stylus rather than the tiny sticks that you get with some models.

And when it comes to writing, Toshiba has included some decent palm rejection technology so that you can place your hand on the screen while you’re writing without messing up your pen input.

The tablet comes with a note-taking app which you can use to scribble notes or draw pictures and diagrams. The app doesn’t look all that special at first glance, but it has one killer feature: the ability to export your notes in a variety of formats.

You can send notes to Evernote, Gmail, or other apps. Or you can expert them as documents which you can open with the ThinkFree Office software that comes with the tablet. You can also transfer the documents to another device to open in Microsoft Office.

There’s also optional handwriting recognition built in, so that when you export your notes you can convert your chicken scratch into printed text that you can search later.

A Toshiba rep also tried to show me a camera utility in the Excite Write that would allow you to sit in a business meeting, snap a photo of a whiteboard from an awkward angle (because you weren’t seated earlier enough to get a good view), and crop the image so that text is easily legible. Unfortunately this demo didn’t work very well on a trade show floor.

Overall the Excite Write Pro makes a good case that a digital pen isn’t just a gimmick, and can actually be useful on an Android tablet (if you didn’t already get that memo from the folks at Samsung who have already released 4 different Galaxy Note devices with digital pens).

But if you don’t actually need the pen, it’s nice to have an option to buy the Excite Pro for $100 less. It’s essentially the same tablet, but without the pen.

Both models have the same screen and processor, and feature Harman Kardon speakers and 32GB of storage.

While that would have been a great price for a tablet with those specs a year ago, these days similar devices are a dime a dozen.