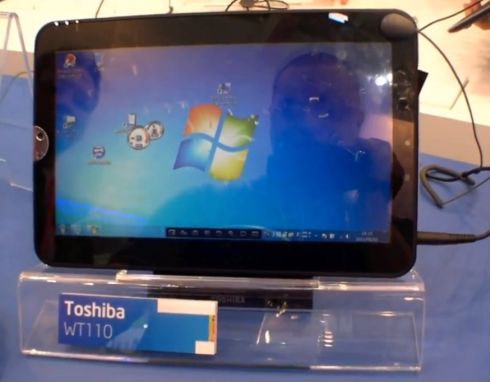 Toshiba unveiled an 11.6 inch Windows tablet this week, and the folks at NewGadgets.de spotted a demo unit on the show floor at Computex in Taiwan. As expected, the Toshiba WT110 looks a lot like a larger version of the Toshiba Thrive 10 inch Android tablet. But there are a few key differences.

The big one, of course, is that the tablet is running Windows 7. But there are also a couple of capacitive touch buttons built into the side for various Windows functions. The Android tablet doesn’t have these buttons, since it’s designed to run Android 3.x Honeycomb which doesn’t require hardware buttons for home, back, or menu functions.

The tablet has a 1366 x 768 pixel capacitive touchscreen display and a 1.5 GHz Intel Atom Z670 oak trail processor. There’s no word on if or when Toshiba will launch the Toshiba WT110 in the US, but it’s due out in Japan later this month.

One reply on “First look at Toshiba WT110 Windows tablet”