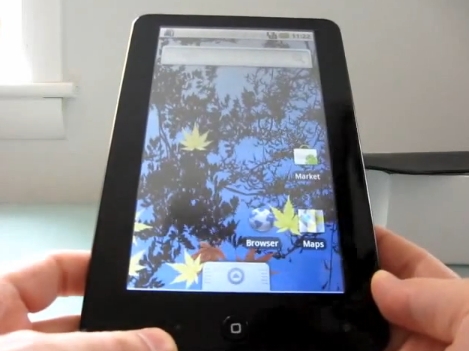 The WiiPad Slim Plus is a 7 inch Android tablet running Google Android 2.1. It has a 720MHz ARM11-based processor, 256MB of RAM, and an 800 x 480 pixel resistive touchscreen display.

The folks at WiiPad sent me a demo unit to review, and I have to say, I’m kind of impressed. Now, to be fair, my expectations were pretty low. But while this little $190 tablet isn’t exactly as user friendly as an Apple iPad, it has a lot of things going for it which make the WiiPad Slim Plus a step up from the Augen GenTouch78 I’ve been playing with for the past few weeks.

For instance, the WiiPad Plus has an accelerometer, which means you can use the tablet in portrait and landscape mode just by tilting the screen. You can also play games that use the accelerometer as a controller. While the resistive touchscreen display can be a little tricky to use — since you have to either use your fingernail or press quite firmly with your fingertip — it’s much more accurate than the GenTouch78 keyboard. And it also seems to support multitouch gestures, including pinch-to-zoom in the Android web browser.

The thing that probably surprised me most is that while the tablet ships with a third party app store installed, it also comes with a functional version of the Google Android Market. You can download and install apps with ease — although many signed apps aren’t available. I was able to install the Kobo and Aldiko eBook apps, for example, but I couldn’t find the Amazon Kindle application.

Not every third party app works perfectly. I tried to get two different internet radio apps to run today, and neither would play any audio. But YouTube videos look great and there’s no problem with the audio.

There are a few quirky things about this tablet. First, the big iPhone-like Home button on the front basically turns the display on and off. There’s a power switch below it on the bottom of the tablet. On the right side there’s a Back and Menu button, but they’re labeled as Menu and Home buttons, respectively. There is no Home button on this tablet, which means that the only way to get back to the home screen is to keep hitting back repeatedly. If you’re in the web browser, that means you’ll have to exit out of every open window before you can get to the home screen.

It’s also interesting that the tablet is being marketed as the WiiPad Slim US, but the box says iRobot, while the splash screen and user manual refer to it as the Haipad MID701 — a device which is being sold at a slightly lower price by some other retailers. My guess is that the tablet is designed by a Chinese OEM and sold under several different brand names around the world.

The user manual also says that the tablet should have HDMI output — and in fact, there are HDMI options in the Settings menu. But there’s no visible HDMI port. That said, I didn’t read anything about a camera in the manual, but when I fired up the Camera and Camcorder apps, lo and behold, I discovered a lo quality (I’m guessing VGA) front-facing camera which I had previously mistaken for an LED on the front of the tablet.

It’s a bit too early to say whether this machine lives up to its full potential as a cheap Android tablet, but my first impression is that it’s not half bad — especially when compared with some other devices in its class. But I also wouldn’t be surprised if someone at Google HQ pulled a switch one day that turned off access to the Android Market, which I suspect the makers of this device may have installed without permission.

Here’s a quick rundown of the specs:

The WiiPad Slim Plus is available for purchase from WiiPad.us for $189.60, plus shipping from China.

You can check out my hands-on video with the tablet below: