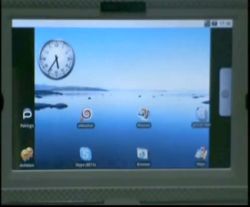 The Skytone Alpha 680 is expected to be the first commercially available netbook to use the Google Android operating system instead of Windows or a fuller featured Linux distribution. And based on a series of demo videos posted to YouTube, I’m a bit underwhelmed. Not that I was expecting much.

There are a lot of people talking about how Google Android could revolutionize the netbook space. But you know how it would do that? By making mini-laptops more like cellphones. If that means 3G connectivity, quick boot speeds, and batteries that last for days, that’s great. But we’re already seeing netbooks that sell for under $400 while allowing you to run virtually any Windows or Linux applications you’d like, so I’m not sure I see the appeal of a stripped down computer that costs as much as $250 anyway.

As you can see in the videos below, Google Android is quite responsive on a netbook with an ARM CPU and 7 inch touchscreen display like the Alpha 680. But you can only run one application at a time. And you’re limited to running the mobile versions of applications including web browsers and Skype designed to run on Google Android. In time, the developer community could port more applications like OpenOffice.org to run on Android, but right now I just don’t see many advantages to Android over a fuller fledged OS like Ubuntu.

Anyway, check out the videos after the break yourself and let us know what you think in the comments.