Samsung is expected to introduce its first smartwatch soon, letting you pair a wristwatch with a smartphone to view notifications and access some apps without pulling your phone out of your pocket. Samsung hasn’t revealed any real details about the watch yet, but serial leaker @evleaks has obtained pictures of the smartphone companion app. 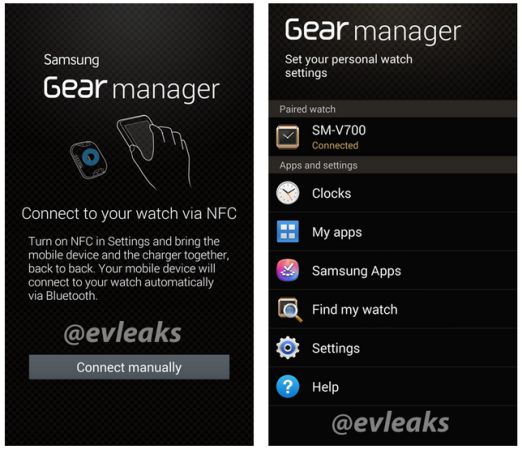 The phone is expected to be called the Samsung Galaxy Gear, and here’s what the screenshots show us:

There’s also a tiny image showing what the back of the watch will look like, but we’ll have to wait a little longer to get actual pictures of the watch itself. It’s also not clear at this point which apps will be available for use on the phone, but it looks like they’re divided into “My apps” and “Samsung apps” sections.

It also seems that users will be able to change the digital watch faces using the “Clocks” option.

While @evleaks has a pretty good track record with obtaining reliable information, I’m a bit more skeptical of another Galaxy Gear “leak” making the rounds today. A site called AmongTech reports that the device will have a 2.5 inch, 320 x 320 pixel OLED touchscreen display, a 1.5 GHz dual-core processor, a 4MP camera, and a 10 hour battery.

Samsung will likely reveal the watch at its pre-IFA press conference on September 4th.