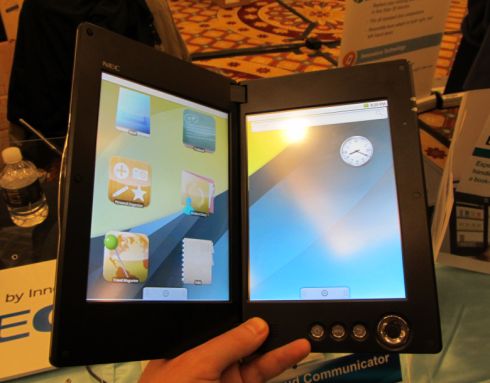 As promised, NEC has begun to show off a dual screen Android tablet, and it’s… well, interesting. The device is powered by an ARM Cortex-A8 processor and has 384MB of memory and 1GB of storage. It has 802.11b/g/ WiFi, Bluetooth, a 3MP camera, full-sized SDHC card slot, GPS, and USB host capabilities. The NEC Cloud Communicator LT-W runs Android 2.1 and has a 5 hour battery.

But the more distinctive feature are the twin 7 inch TFT resistive touchscreen displays.

When you close the NEC Android Cloud Communicator LT-W, it almost looks like a netbook. When you open it up, it looks more like a book, with a seam down the middle. Some specialized apps open across both windows, allowing you to drag items from one screen to another. Other apps open in just one window or the other. Interestingly, you can launch separate apps in each window, as long as they’re apps that only open in one window. That’s because Google Android already supports multitasking — it’s just that you normally can’t see the apps that aren’t in the foreground.

The biggest problem with the Cloud Communicator is that there’s really no good way to hold it. While it looks sot of like a book, you can’t really hold it with two hands like a book because you probably need one hand to navigate. You can stick your hand in the middle and pinch the tablet, but then your thumb may get in the way and really the whole experience isn’t that comfortable.

I could see myself liking this little guy better if you could fold one screen behind the other and flip back and forth between a single and dual window mode. Unfortunately what you see is what you get. The device only opens to a 180 degree angle, which means it’s two screens or no screens.

I have to give NEC credit for trying something new. I just wish I could figure out why anyone would want this particular new tablet.