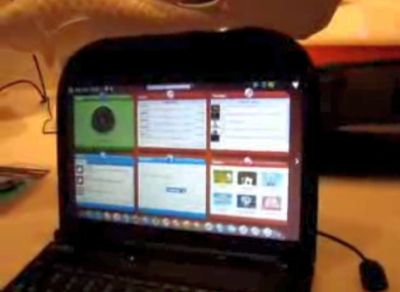 I got a chance to spend some time with the Lenovo Skylight today. It’s one of the first smartbooks based on Qualcomm’s Snapdragon platform. Thanks the ARM-based processor, the Skylight is ultrathin, fanless, and designed to get more than 10 hours of battery life. It also has an HD display and can play 720p video locally. But I found that it struggles a bit with some high quality Flash video.

One of the first things I checked was how the Skylight handles Hulu video. In windowed mode, playback is pretty good. There might be a few dropped frames, but you won’t really notice. If you blow the picture up to full screen mode, on the other hand, the video becomes quite choppy and their are audio/video sync issues. Lenovo, Qualcomm, and Adobe are working on this, and it’s possible the issue could be resolved by the time the Skylight hits the streets in April.

The overall user interface is quite interesting. While the smartbook is running Linux, you’ll never see a command line or any of the usual desktop apps. Instead, there’s a dock at the bottom of the device that lets you access all the available applications. Right now there’s just over two dozen, but there could be more or fewer by the time the Skylight is available to the public.

When you launch an app from the dock, it doesn’t open in full screen mode the way you might expect. Rather, it adds a widget to the home screen. You can see information from up to 6 widgets at a time, with apps for Twitter, Facebook, weather, RSS readers, or Firefox. If you want to use an app like Firefox, just click on the widget to open the 3-pane view, which brings that application to the forefront, while still letting you see live updates from two other widgets in a sidebar.

If you’d prefer to make an app full-screen, you can do that too, and make the sidebar go away altogether.

Overall, I’m pretty impressed with how well the UI works. Lenovo has succeeded in making a device where you don’t think about the underlying operating system any more than most people think about the OS running on their mobile phones. But it still provides much of the functionality you would expect from a web-centric notebook, particularly through the Firefox web browser. The demo unit I saw was running Firefox 3.6 beta 5 with the Flash plugin. While the Skylight had a bit of trouble keeping up with Hulu, it handled Javascript-heavy web sites such as Google Maps beautifully.

The only thing I worry about is the fact that right now the Skylight OS is a closed system. If you want to update to the latest version of Firefox, for instance, you’ll need to wait for Lenovo to push the update. And while the idea is to open the platform up to third party developers, it’s certainly possible that those 20-some apps and widgets that are available today are the only ones you’ll ever get to play with.

You can check out my hands-on video after the break.