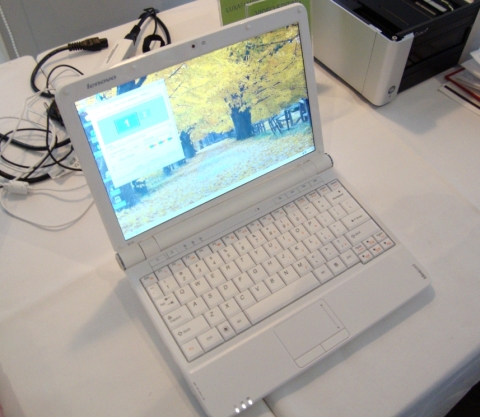 Lenovo announced its upcoming IdeaPad S12 thin and light notebook with a 12 inch screen last month. But while the folks at Laptop Magazine and GottaBeMobile got to spend soem time with pre-production units, those models had integrated graphics, not the NVIDIA ION platform which bundles an Intel Atom CPU with NVIDIA graphics to offer enhanced video and graphics performance.

Now PC Pro has a first look at an ION powered version of the notebook. While the ION version of the IdeaPad S12 sports the same 1.6GHz Intel Atom N270 CPU found in many netbooks, PC Pro reports that the S12 can handle 1080p movie playback and encoded a HD movie trailer in 4 minutes, something it would take a normal netbook about 15 minutes to accomplish.

But since the computer’s NVIDIA GeForce 9400M graphics processor isn’t designed to play Flash video, you’ll still notice some stuttering if you try watching HD flash video or even full screen video from sites like Hulu.

In addition to an NVIDIA graphics card, this notebook also sets itself apart from the netbook crowd by including an HDMI ports, 2GB of RAM, and a 320GB hard drive. The 12 inch screen has a resolution of 1280 x 800.