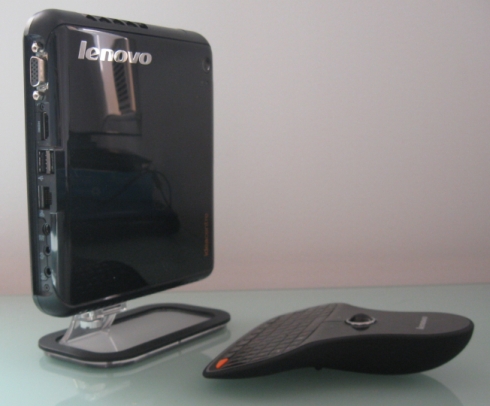 The Lenovo IdeaCentre Q150 is a ridiculously small desktop computer that also happens to pack a bit of a punch — at least in some configurations. While the base model ships with a single core Intel Atom D410 processor and Intel GMA 3150 graphics, you can spend a little more money to get the nettop with a dual core Atom D510 chip and NVIDIA ION graphics. It’s also available with up to 2GB of memory, up to 500GB of hard drive space, and Windows XP or Windows 7 Home Premium.

Lenovo sent me a demo unit to test out, along with a handheld multimedia remote control/keyboard.

I’ll be honest. I haven’t turned the computer on yet, because I just finished unboxing it a few minutes ago. But it’s just so incredibly… tiny. I mean seriously, it’s not much larger than a CD case — or rather, a double CD case like the one shown off in the photos below. In fact, it’s probably thinner than two CD cases stacked together.

Of course, that means if you want to use the computer to burn discs or play DVDs, you’re going to need to plug in a USB disc drive — which will nearly double the size of your computer setup. You can find some photos of the Lenovo IdeaCentre Q150 next to a Samsung USB DVD drive after the break.

I’ll be testing the nettop over the next week or two and I’ll have some information to share about how it actually functions as a PC soon. But in the meantime, you can check out my unboxing video below.

6 replies on “First look at the Lenovo IdeaCentre Q150 – Video”